Chillisquaque Creek is a tributary of the West Branch Susquehanna River in Montour County and Northumberland County, in Pennsylvania, in the United States. It is approximately 20.2 miles (32.5 km) long and flows through Derry Township, Washingtonville, and Liberty Township in Montour County and East Chillisquaque Township and West Chillisquaque Township in Northumberland County. The watershed of the creek has an area of 112 square miles (290 km2). Agricultural impacts have caused most of the streams in the watershed of the creek (including the main stem) to be impaired. Causes of impairment include sedimentation/siltation and habitat alteration. The average annual discharge of the creek between 1980 and 2014 ranged from 48.2 to 146.0 cubic feet per second (1.36 to 4.13 m3/s). Its watershed mainly consists of rolling agricultural land. The creek's channel flows through rock formations consisting of sandstone and shale. It is a warmwater stream.

The watershed of Chillisquaque Creek occupies parts of four counties: Columbia County, Montour County, Northumberland County, and Lycoming County. There is a gauging station along the creek near Washingtonville. A Shawnee village had been established at the confluence with the West Branch Susquehanna River by 1728. A fort known as Fort Bosley also historically existed on the creek near Washingtonville. Numerous bridges were built over the creek in the 19th and 20th centuries, two of which are on the National Register of Historic Places. The creek is designated as a Warmwater Fishery and a Migratory Fishery. It lacks trout, but has in the past been stocked with various other fish species. A tract of the creek's floodplain is known as the Chillisquaque Creek Natural Area and is owned by Bucknell University. Various bird species have been observed near it and woodland wildflowers inhabit the creek's vicinity. Recreational opportunities in the watershed include canoeing and fishing. 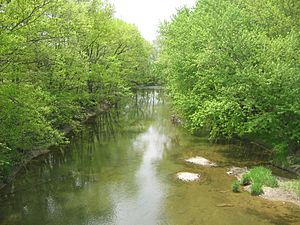 Chillisquaque Creek begins at the confluence of East Branch Chillisquaque Creek and Middle Branch Chillisquaque Creek near the northern border of Derry Township, Montour County. It flows west-southwest for a few tenths of a mile before turning south-southwest. After several tenths of a mile, it turns west for a short distance and receives the tributary West Branch Chillisquaque Creek from the right. The creek then turns south-southeast for more than a mile, flowing alongside Pennsylvania Route 54 and crossing it once. In this reach, it briefly flows alongside the western border of Washingtonville before crossing Pennsylvania Route 254 and receiving the tributary Mud Creek from the left. The creek then begins flowing in a roughly west-southwesterly direction and soon enters Liberty Township. It continues flowing in a similar direction in Liberty Township (though it does flow north, west, and then south for several tenths of a mile at one point), flowing through a broad valley with Limestone Ridge on the north and receiving many unnamed tributaries from both sides. After several miles, the creek leaves the valley and crosses Interstate 80. Several tenths of a mile further downstream, it exits Liberty Township and Montour County.

Reaches of Chillisquaque Creek are designated as an impaired waterbody. Causes of impairment include sedimentation/siltation and habitat alteration, while likely sources include agriculture and industrial point-source discharge. Many streams in the watershed experience significant impacts due to agriculture, as heavy use of agricultural lands reduces the creek's water quality. A total of 215 miles (346 km) of streams, or about 83% of all the stream miles in the watershed, are impaired. The nearby Mahoning Creek is in "better environmental shape" than Chillisquaque Creek. However, in the 1980s, the concentrations of pollutants in the creek were relatively low, despite being increased by discharges from a nearby power plant. For instance, the selenium concentration was consistently under 0.010 milligrams per liter, the United States Environmental Protection Agency criterion for that pollutant. 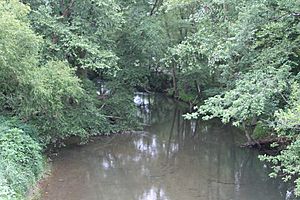 The upper reaches of the watershed of Chillisquaque Creek are in the Muncy Hills. Montour Ridge is located to the south of the watershed. Additionally, Limestone Ridge is situated near the creek. The creek's drainage basin mainly consists of rolling agricultural land, with some forested floodplains. Much of the central part of Montour County is in the 100-year floodplain of the creek and its tributaries. In places, it has high, muddy banks, and is generally "placid", save for some riffles and gravel bars. It is rarely blocked by fences and fallen trees, but there are a few strainers. A seep is located along the creek near the Bucknell preserve and a spring is located below Pennsylvania Route 54.

Chillisquaque Creek cuts a broad and almost flat valley through rock of the Hamilton Group. It is 2 to 3 miles (3.2 to 4.8 km) wide and rarely rises to more than 50 feet (15 m) higher than the creek. A 1775 map shows the creek's headwaters as being at Tilghmans Springs. However, A. Joseph Armstrong (author of Trout Unlimited's Guide to Pennsylvania Limestone Streams) was unable to find the springs. The creek is between 20 and 30 feet (6.1 and 9.1 m) wide and has no apparent limestone influence, despite being near Limestone Ridge and flowing through Limestone Township.

Chillisquaque Creek flows in a generally southwesterly direction. The channel of the creek is sinuous and flows through rock formations consisting of sandstone and shale. Oriskany sandstone and Lower Helderberg limestone occur on Limestone Ridge near it. Oriskany cherty sandstone occurs near the confluence of the tributary Mud Creek. Additionally, Black Genesee shales have also been observed near the creek, as does the Tully limestone. Rock of the Hamilton Group is common in the area as well and is in places covered with sandstone boulders of the Pocono Formation. Hydric soils occur along it in central Montour County.

In the early 1900s, the average annual rate of precipitation in the watershed of Chillisquaque Creek was 35 to 45 inches (89 to 114 cm). The creek has relatively warm water. 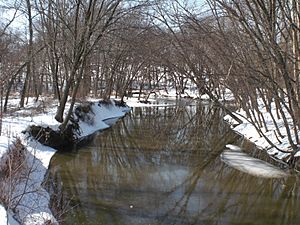 The land alongside Chillisquaque Creek is mainly used for farming. As of the 1980s, the main crops are corn and soybeans. 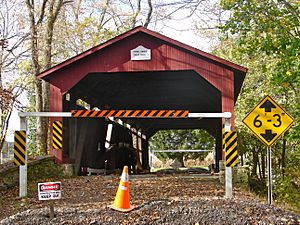 Chillisquaque Creek was entered into the Geographic Names Information System on August 2, 1979. Its identifier in the Geographic Names Information System is 1171784. The creek is also known as Chilisquaque Creek. Its name most likely comes from the Shawnee word chilisuagi, meaning "place of the snow-birds". However, other possible meanings of the word include "flight of the wild goose", "frozen duck", and "man made perfect".

The Shawnee Indians historically had a large village/town at the mouth of Chillisquaque Creek. The village was established by 1728 and was known as Chenastry and Otzinachson. The Shawnees on the creek moved to Western Pennsylvania in 1728. Additionally, Andrew Montour historically owned a plantation near the creek's mouth. In 1745, Bishop Spagenberg passed by the creek and noted the former Indian village there in his journal. A Mingo chief named Logan was living at the mouth of the creek in about 1753.

A frontier fort known as Fort Rice used to be located on Chillisquaque Creek near what is now Washingtonville. William Plunket had settled near Chillisquaque Creek as early as 1772. Boyd and Wilson built a mill at the mouth of the creek in 1791. The first Methodist camp meeting in the area was held on the creek 1.5 miles (2.4 km) from the West Branch Susquehanna River in August 1806. The creek was declared a public highway in the 1820s. The West Branch Division of the Pennsylvania Canal historically had an aqueduct over the creek. However, by 1842, it was in need of repairs. On July 18 and 19, 1851, a 32-hour-long storm caused Chillisquaque Creek to rise higher than it had in 57 years.

In the early 1900s, the main industries in the creek's watershed included agriculture and clay mines. The creek was also used as water power for a number of small mills. Around this time period, railroads in the watershed included the Susquehanna, Bloomsburg, and Berwick Railroad and the Philadelphia and Reading Railroad. Major communities included Exchange, Jerseytown, Potts Grove, Washingtonville, Strawberry Ridge, and White Hall. Their populations were 225, 200, 184, 183, 160, and 140, respectively.

The drainage basin of Chillisquaque Creek is designated as a Warmwater Fishery and a Migratory Fishery. The creek was observed by A. Joseph Armstrong to lack trout. In 1986, the creek was not being stocked. However, it was stocked with black bass, sunfish, and yellow perch in 1934 and with yellow perch in the spring of 1936. In 1986, it contained many of the species found in the West Branch Susquehanna River, including rock bass. Smallmouth bass have also been observed in the creek. Disease is moderately common among young-of-the-year smallmouth bass in the creek. 2011 was the first year where diseased smallmouth bass were documented in the creek since studies began in 2009.

A tract of forested floodplain known as the Chillisquaque Creek Natural Area (or Bucknell Preserve, Tobias Marsh, or Mexico Road Swamp) is located in Liberty Township, Montour County. A deciduous bottomland forest with pools and channels occurs along the creek, while more mesic forests occur higher up. The tract of land is owned by Bucknell University, whose students and faculty sometimes conduct research there. The tract has an area of 66 acres (27 ha) and has a high level of tree biodiversity. Common tree species include basswood, bitternut hickory, pin oak, and shagbark hickory. In the preserve, there is also a population of cat-tail sedges. Graminoid marshes occur along the creek near Mexico Road. Such marshes are mainly dominated by cattails, grasses, rushes, and sedges.

Reaches of Chillisquaque Creek in Derry Township, Montour County would benefit from additional riparian buffering consisting of native trees to mitigate the effects of nonpoint source pollution. Woodland wildflowers such as bluebells occur along the creek in April. Virginia cowslips, mint, skunk cabbage, mountain honeysuckle, and scallions also are common along it towards the end of April.

A number of bird species occur at the Bucknell Preserve along Chillisquaque Creek. These include marsh wrens and soras. Virginia rails were observed at the site in 1980 and 1984, though it is likely that they still remain there. Additionally, several mussel species that require high levels of water quality to survive have been observed in the creek. In the Montour County reach of the watershed of Chillisquaque Creek, livestock is commonly allowed access to streams.

At least 17.9 miles (28.8 km) of Chillisquaque Creek, from Pennsylvania Route 54 at Washingtonville downstream to its mouth, are navigable by canoe. The difficulty rating of the creek is 1 and the scenery is described in Edward Gertler's book Keystone Canoeing as "good". The creek is suitable for beginners and is typically canoeable from March to May, with the exception of dry years. Not much water is required to canoe on it. However, there is no access to the creek's mouth.

A greenway corridor for Chillisquaque Creek was proposed in the Montour County Comprehensive Plan. Fishing and boating are permitted on Lake Chillisquaque, though only non-powered and electric boats are allowed. The best fishing opportunities on the creek are in the springtime. However, A. Joseph Armstrong's book Trout Unlimited's Guide to Pennsylvania Limestone Streams described the creek as "not an attractive stream.".

A campsite known as Shangri-La on the Creek is situated on Chillisquaque Creek at the base of Montour Ridge. It has 52 creekside sites and another 115 sites that are forested to varying degrees. Recreational opportunities at the site include fishing and Frisbee golf.

A reach of Chillisquaque Creek was once a third-priority candidate for a Pennsylvania Scenic Rivers designation.

All content from Kiddle encyclopedia articles (including the article images and facts) can be freely used under Attribution-ShareAlike license, unless stated otherwise. Cite this article:
Chillisquaque Creek Facts for Kids. Kiddle Encyclopedia.