Beaver Run is a tributary of Chillisquaque Creek in Montour County and Northumberland County, in Pennsylvania, in the United States. It is approximately 6.2 miles (10.0 km) long and flows through Liberty Township in Montour County and East Chillisquaque Township in Northumberland County. The watershed of the stream has an area of 12.0 square miles (31 km2). Reaches of the stream are designated as impaired due to siltation caused by agriculture. Numerous bridges have been constructed across it and it lacks a riparian buffer in some reaches.

The channel of Beaver Run (along with those of Chillisquaque Creek, Mauses Creek, and Kase Run) is partially created by Limestone Ridge and a range of hills running in an east-west direction through the central part of Montour County. To the south, the drainage basin of the stream is marked by Montour Ridge.

The watershed of Beaver Run has an area of 12.0 square miles (31 km2). The mouth of the stream is in the United States Geological Survey quadrangle of Northumberland. However, its source is in the quadrangle of Riverside.

There are a total of 24.6 miles (39.6 km) of streams in the watershed of Beaver Run. Of these, 12.16 miles (19.57 km), or 49.4 percent, are designated as impaired. The cause of the impairment is siltation due to agriculture. At least one person has received a permit to discharge stormwater into an unnamed tributary of the stream. 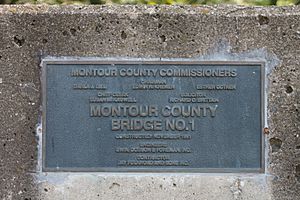 There are some areas along Beaver Run where the stream lacks a riparian buffer. According to the Montour County Natural Areas Inventory, planting native trees along the stream in these reaches would reduce nonpoint source pollution and raise water quality.

An unnamed tributary of Beaver Run is designated as a Warmwater Fishery.

All content from Kiddle encyclopedia articles (including the article images and facts) can be freely used under Attribution-ShareAlike license, unless stated otherwise. Cite this article:
Beaver Run (Chillisquaque Creek tributary) Facts for Kids. Kiddle Encyclopedia.