Bedřich (Friedrich) Hrozný ( 6 May 1879 – 12 December 1952) was a Czech orientalist and linguist. He contributed to the decipherment of the ancient Hittite language, identified it as an Indo-European language and laid the groundwork for the development of Hittitology.

Hrozný was born in Lysá nad Labem, Bohemia, Austria-Hungary. In the town of Kolín he learned Hebrew and Arabic. At the University of Vienna, he studied Akkadian, Aramaic, Ethiopian, Sumerian and Sanskrit, as well as the cuneiform used in Asia Minor, Mesopotamia and Persia. He also studied orientalism at Humboldt University of Berlin.

In 1905, following excavations in Palestine, he became Professor at the University of Vienna.

In 1906, at Hattusa (modern Boğazkale, about 200 km east of Ankara) a German expedition found the archives of the Hittite kings in cuneiform, but in an unknown language. While on active duty in the Austro-Hungarian army during World War I, Hrozný published in 1917 a description of the language showing that it belonged to the Indo-European family.

In 1925 Hrozný led a Czech archaeological team that discovered 1000 cuneiform tablets containing contracts and letters of Assyrian merchants in the Turkish village of Kültepe, and excavated the nearby ancient Hittite city of Kanesh.

In 1929, Hrozný founded Archiv Orientální, which became one of the leading journals for Oriental Studies.

Later in his life, he tried to decipher the hieroglyphic script used by the Hittites and scripts used in ancient India and Crete, but failed in his effort. From 1919 to 1952, he was a Professor of cuneiform research and ancient Oriental history at the Charles University in Prague. After the German occupation of Czechoslovakia he was made rector of the Charles University, holding that post in 1939–1940. In that capacity, he helped some students escape arrest during an incident in 1939, stating to the German officer in charge that the Germans had no legal right to pursue students on the independent university's territory. A stroke in 1944 ended his scientific work.

Deciphering of the Hittite language 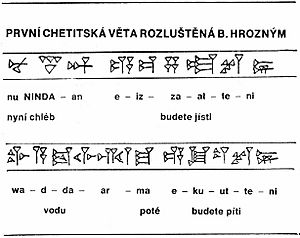 To solve the mystery about the Hittite language, Bedřich Hrozný used two sentences that appeared in a text that reads: nu NINDA-an ezzatteni watar-ma ekutteni. It was known at that time that the ideogram for NINDA meant bread in Sumerian. Hrozný thought that the suffix -an was perhaps the Hittite accusative. Then, he assumed that the second word, ed-/-ezza, had something to do with the bread and assumed that it could be the verb to eat. The comparison with the Latin edo, the English eat and the German essen led to the assumption that NINDA-an ezzatteni means "you will eat bread". In the second sentence, Hrozný was struck by the word watar that has similarities to the English water and German Wasser. The last word of the second sentence, ekutteni, had the stem eku-, which seemed to resemble the Latin aqua (water). So, he translated the second sentence as "you will drink water". Hrozny soon realized that the Hittites were speaking an Indo-European language, making it much easier to decipher and read their cuneiform tablets. Using these insights, Hrozný continued his work and was able to publish the Hittite grammar in 1917.

All content from Kiddle encyclopedia articles (including the article images and facts) can be freely used under Attribution-ShareAlike license, unless stated otherwise. Cite this article:
Bedřich Hrozný Facts for Kids. Kiddle Encyclopedia.