Beemer is a village in Cuming County, Nebraska, United States. The population was 678 at the 2010 census.

According to the United States Census Bureau, the village has a total area of 0.40 square miles (1.04 km2), all land. 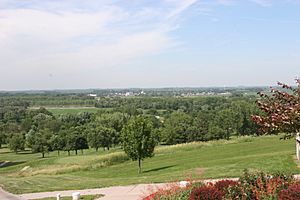 The first school in Beemer Township was taught by Mrs. William Sharp in 1867 in her log cabin, a short distance to the northwest of where Beemer is now located.

West of Beemer, a small stream called Rock Creek flows into the south side of the Elkhorn River. In 1865, August Lambrecht built a water-driven grain and flour mill on the creek about 1,000 feet (300 m) from the river. Lambrecht's mill, combined with the creek and with favorable agricultural conditions, attracted a small concentration of settlers; the area was known as "Rock Creek", after the stream.

In 1871, the tracks of the Fremont, Elkhorn and Missouri Valley Railroad, which followed the Elkhorn upstream from Fremont, reached Wisner; the line reached Norfolk in 1879. As the railway was extended, water stops were needed at 7-to-10-mile (11 to 16 km) intervals to support the steam locomotives. The railroad stops were also served by telegraphs for the purpose of administering and controlling the railroad as well as business development of the telegraphs. The telegraph station at the water stop located at the site of present-day Beemer was named after the nearest significant settlement, Rock Creek, and used the call letters "R C". So, for the next fifteen years, two locations, several miles apart and on opposite sides of the Elkhorn, were referred to as 'Rock Creek': one was the area around the Rock Creek stream near Lambrecht's mill and the other the area around the railway water stop and telegraph station.

In 1885, Allen D. Beemer, George Canfield, and K.C. Morehouse laid out lots to the north of the Rock Creek water stop and platted a village to be known as Rock Creek, as filed in the county seat of West Point on May 26, 1885. Mr. Beemer built the first rail depot building, and led the drive to build a wooden bridge across the Elkhorn. His efforts on behalf of the area were rewarded in 1886, when Congressman Edward K. Valentine secured a post office for the settlement, naming it the Beemer Post Office. On July 15, 1886, in response to a petition of 54 residents, a village named Beemer was incorporated with Harry Delmont, W.D. Gibbon, John M. Barber, F.J. Fitzgerald, and Niels Hansen the village trustees. In that year Mr. Beemer founded a newspaper, the Beemer Times; and the rail company changed the name of the station from Rock Creek to Beemer, although its telegraph call signs remained "R C" (for "Rock Creek") until the depot closed in 1963.

The first century was marked by spurious growth and numerous initiatives to develop Beemer. The Beemer Times, founded by A.D. Beemer around 1 March 1886, chronicled the times, the progress, the achievements, the disasters, and the dilemmas that faced early Beemer. The paper assailed ills like the muddy streets, the lack of sidewalks, and the excessive number of taverns; and it reported on more favorable developments like improvements to the schooling, new commercial enterprises, and major modernizations such as waterworks, electrification, road improvements, and telephone systems. 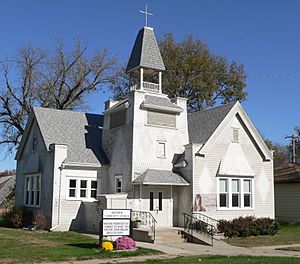 Original site of the Congregational Church 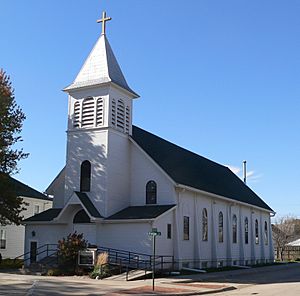 The first Beemer Public School was held in a small frame building located on the northest corner of Third and Beemer Streets. By 1886, in order to support its 32 enrolled pupils, a two-room, frame building was built on the southwest corner of Fifth and Beemer Streets. The names of absent or tardy students were duly reported in the Beemer Times. In 1892, voters approved $10,000 in bonds for a modern two-story brick school. The school officers, F.J. Fitzgerald, A.D. Beemer, and Charles Decker reported an enrollment of 210 pupils. The building was erected on the north side of Third Street between Blaine and Harrison Streets (approximately where a 1964 addition to the school was eventually built). In 1917, the village passed another bond issue for a new school building on the northeast corner of Third and Blaine Streets. The new building was used for the graduation ceremonies in May 1918; the older, adjacent building was torn down that summer. The 1918 building would continue to be used until 2008.

There were 291 households, of which 23.7% had children under the age of 18 living with them, 50.5% were married couples living together, 7.6% had a female householder with no husband present, 1.0% had a male householder with no wife present, and 40.9% were non-families. 35.1% of all households were made up of individuals, and 21.6% had someone living alone who was 65 years of age or older. The average household size was 2.18 and the average family size was 2.85.

Nearly 100 percent of Beemer's neighborhood streets are paved and complete with storm sewage systems. The village property includes a village office building, a fire station, the town park, a dance hall, and a library. The village operates its own works system in the eastern outskirts of town and a sewage treatment plant located close to the nearby Elkhorn River. Power and telecommunications services are provided by regional companies. 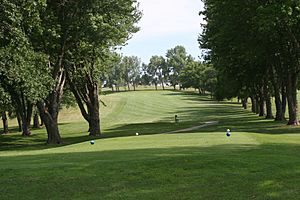 Recreational facilities include the school gymnasium, the Beemer park which is complete with tennis courts and picnic areas, and the nearby Indian Trails Country Club, an 18-hole course on the bluffs of the Elkhorn River colloquially known as the ‘Beemer Golf Course’. Senior citizens are entertained at the Senior Citizen Center collocated with Post 159 of the American Legion.

The Beemer elementary school, located in Beemer, is part of the West Point-Beemer Public School system. The district's high school is located about 10 miles from Beemer.

All content from Kiddle encyclopedia articles (including the article images and facts) can be freely used under Attribution-ShareAlike license, unless stated otherwise. Cite this article:
Beemer, Nebraska Facts for Kids. Kiddle Encyclopedia.