Norfolk is a city in Madison County, Nebraska, United States, 113 miles northwest of Omaha and 83 miles west of Sioux City at the intersection of U.S. Routes 81 and 275. The population was 24,210 at the 2010 census, making it the ninth-largest city in Nebraska. It is the principal city of the Norfolk Micropolitan Statistical Area.

In late 1865 three scouts were sent from a German Lutheran settlement near Ixonia, Wisconsin, to find productive, inexpensive farmland that could be claimed under the Homestead Act. From the Omaha area they followed the Elkhorn River upstream to West Point. Finding that area too crowded, they continued up the river. On September 15, they reached the junction of the Elkhorn and its North Fork, and chose that area as a settlement site. On May 23, 1866, a party of 124 settlers representing 42 families from the Ixonia area set out for northeast Nebraska in three wagon trains. They arrived at the new site on July 15. A second group of settlers from Wisconsin arrived in July 1867.

The original name of the colony was a variant of "North Fork", but accounts differ on the exact name: "Northfork", "Nor'fork", and "Nordfork" are all suggested. The name was submitted to federal postal authorities, and at some point was transmuted to "Norfolk". The pronunciation "Norfork" is still used by many Nebraskans.

The North Fork settlement was named the county seat in 1867. In 1875 a series of elections changed this. In the first of these Norfolk, which at the time had 45 voters, was eliminated. In a subsequent election Madison was chosen over Battle Creek.

The Fremont, Elkhorn and Missouri Valley Railroad was built after the discovery of gold in the Black Hills in South Dakota. It ran from the Omaha area up the Elkhorn valley, then across northern Nebraska and into South Dakota. Its arrival at Norfolk in 1879 connected the city through Wisner to Blair on the Missouri. The Omaha, Niobrara, and Black Hills branch of the Union Pacific ran north from the railroad's main line at Duncan to Norfolk; it reached the city in 1880. The Chicago, St. Paul, Minneapolis & Omaha Railroad was completed to Norfolk in 1882.

The development of these railway connections led to significant growth in the city. In 1886 Norfolk's population reached 1000, making it a city of the second class. A street railway system and a public water supply were established in 1887. In 1888 a franchise was granted to the Norfolk Electric Light Company, and the Nebraska Telephone Company was given a right-of-way for "general telegraph and telephone business".

The Nebraska legislature created the Insane Asylum in Norfolk in 1885; it accepted its first patients in 1888. In 1920, the institution's name was changed to the Norfolk State Hospital; in 1962, it became the Norfolk Regional Center. As of 2010, it was a 120-bed institution.

In 1900, the city had a population of 3,883, nearly quadruple its population of a decade earlier. By 1910, it had more than 6,000 people, comprising roughly one-third of Madison County's population of 19,101. In 1915, petitions were filed for an election to move the county seat from Madison to Norfolk. The measure, however, failed to secure the necessary number of votes.

In the 1910s, development began on the Meridian Highway as a direct north-south route across the United States; the route of the highway ran through Norfolk. The 1924 completion of the Meridian Bridge across the Missouri River at the Nebraska-South Dakota border made the highway a continuous year-round thoroughfare. In 1926, it was designated as U.S. Highway 81. A second federal highway, U.S. Highway 275, received its designation in 1939; it follows the Elkhorn valley upstream from Omaha through Norfolk to O'Neill. During World War II, the segment from Norfolk to O'Neill was a portion of the Strategic Network of Highways; as such, it was given a high priority for federal funds for materials and for federal maintenance funds. 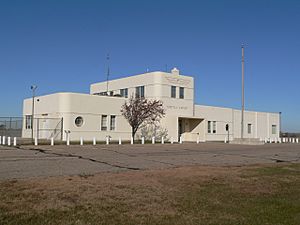 Air travel developed in Norfolk beginning with the establishment of a flying school in 1928. The school's field gradually expanded and was improved. In 1942 the WPA began construction of a municipal airport at the site. Although construction materials were limited during World War II, Norfolk received priority as an auxiliary field to several war-related airports, including Sioux City Air Field. After the war Norfolk congressman, Karl Stefan, a member of the Congressional Air Policy Board, used his influence to secure further funding for the airport. Commercial passenger flight through the airport began in the early 1950s.

In the 1970s, another attempt was made to move the county seat from Madison to Norfolk. In a 1975 county-wide election, the move's proponents failed to secure a simple majority. A 60% majority would have been necessary for the measure to pass.

On September 26, 2002, three gunmen robbed a US Bank branch in Norfolk, killing five people in the process. This was the nation's deadliest bank robbery in at least a decade.

Norfolk is the principal retail center of northeastern Nebraska. Other significant elements of the local economy include agriculture, manufacturing, and services including education and health care.

Major local manufacturers include Nucor, which employs about 1200 people manufacturing steel products at four locations in Norfolk; Covidien, with about 440 employees producing syringes and other medical supplies; Continental, employing about 350 producing high-pressure and hydraulic hose; Norfolk Iron & Metal, with 320 employees manufacturing steel products; and Wis-Pak, employing about 100 to produce soft drinks and other beverages.

Norfolk has a single post-secondary educational institution, Northeast Community College, with over 7,000 students taking courses for credit. Over 18,000 students took non-credit courses; another 1,200 were in adult-education courses, including GED preparation, English as a second language, and preparation for the Naturalization test.

There are several private elementary and high schools in the city. Norfolk Catholic Schools operates a grade school and Norfolk Catholic High School, with a total enrollment of about 650. Two Lutheran elementary schools and a high school enroll a total of about 470 pupils. St. Paul's Lutheran School is a Pre-K-8 school of the Wisconsin Evangelical Lutheran Synod (WELS) in Norfolk. Keystone Christian Academy enrolled about 60 students in pre-school through twelfth grade until its closure in May 2019.

All content from Kiddle encyclopedia articles (including the article images and facts) can be freely used under Attribution-ShareAlike license, unless stated otherwise. Cite this article:
Norfolk, Nebraska Facts for Kids. Kiddle Encyclopedia.