O'Neill is a city in Holt County, Nebraska, United States. The population was 3,705 at the 2010 census. It is the county seat of Holt County.

O'Neill was platted in 1874. It was named for one of its founders, John O'Neill. O'Neill was originally built up chiefly by Irish settlers.

The town was incorporated in 1882.

O'Neill is the official Irish capital of Nebraska. Cattle, potatoes, tomatoes, soybeans and corn are the major products produced near this town. 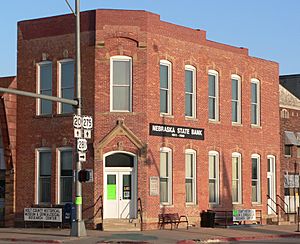 Saint Patrick's Day and the Summerfest in July are the town's main celebrations.

For now, O'Neill houses the world's largest permanent shamrock. Made of colored concrete, it was installed in the main intersection of 4th & Douglas in 2000.

Until 1992, O'Neill was served by the Chicago and North Western Transportation Company. The line, known as the "Cowboy Line", ran from Norfolk, Nebraska to Chadron. The line has since been removed and "railbanked"; it is now part of the Cowboy Trail, the longest bike trail in Nebraska.

O'Neill is also served by a former Chicago, Burlington & Quincy branch line from the Sioux City, Iowa vicinity. This line is now operated as the Nebraska Northeastern Railway.

All content from Kiddle encyclopedia articles (including the article images and facts) can be freely used under Attribution-ShareAlike license, unless stated otherwise. Cite this article:
O'Neill, Nebraska Facts for Kids. Kiddle Encyclopedia.