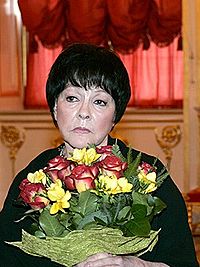 Bella Akhatovna Akhmadulina (10 April 1937 — 29 November, 2010) was a Russian poet. Her poems used metaphors, and were described by Nobel Prize winner Joseph Brodsky as a "treasure of Russian poetry.

Her first poems were published in 1955. The government of the Soviet Union said her poems were too personal and emotional. She died in Pereldelkino, near Moscow, from a heart problem.

All content from Kiddle encyclopedia articles (including the article images and facts) can be freely used under Attribution-ShareAlike license, unless stated otherwise. Cite this article:
Bella Akhmadulina Facts for Kids. Kiddle Encyclopedia.