Belle Chasse is a census-designated place (CDP) in Plaquemines Parish, Louisiana, on the West Bank of the Mississippi River. Belle Chasse is part of the Greater New Orleans Metropolitan area. The population was 12,679 at the 2010 census.

Belle Chasse is the largest town in Plaquemines Parish.

Belle Chasse is home to the famous "Orange Fest," "Crawfish Fest," and "Gamers Fest." It is also home to the Plaquemines Parish Seafood Festival.

There is little consensus regarding the origin of the name Belle Chasse. In French, belle chasse literally means "beautiful hunting." It is widely believed that it was so named due to the richness of wildlife which the initial French colonists observed when they settled in the region. Others say that Belle Chasse was named after a Colonel Joseph D. Bellechasse, who lived in New Orleans around the late 18th and early 19th century. Alternatively, it was named after the plantation of Deville de Goutin Bellechasse. 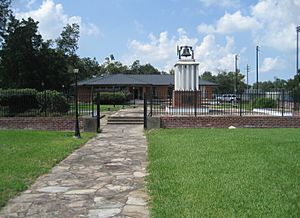 Bell from Benjamin's Belle Chasse Plantation at the Public Library

The Confederate statesman Judah P. Benjamin was the most famous owner of the Belle Chasse plantation. After falling into decay and abandonment by the 1930s, the landmark plantation house was demolished in 1960. The bell was salvaged and today is in front of the Belle Chasse Public Library.

The Naval Air Station was founded in 1920 on the south shore of Lake Pontchartrain, but in 1957 it relocated to its current location (Belle Chasse, Louisiana). It has been designated as a Joint Forces Reserve Air Station. It is home to various naval air units as well as an Air Force Reserve fighter squadron and a Marine Corps Reserve helicopter unit. In March 2009, U.S. Navy Reserve Airborne Early Warning Squadron 77 (VAW-77) relocated its six E-2C aircraft from NAS Atlanta, GA to Belle Chasse. The squadron routinely deploys to the Caribbean on counter-narcotic operations. The squadron aircrew are all U.S. Naval Reservists while the maintenance department for the aircraft is run by Northrop Grumman Field Services.

Belle Chasse serves as a headquarters for the Louisiana Air Force National Guard and home of the 159th FW (Fighter Wing). It served as the principal helicopter staging area for rescue operations during Hurricane Katrina.

There were 3,400 households, out of which 41.6% had children under the age of 18 living with them, 62.6% were married couples living together, 12.0% had a female householder with no husband present, and 20.8% were non-families. Of all households 17.2% were made up of individuals and 6.3% had someone living alone who was 65 years of age or older. The average household size was 2.80 and the average family size was 3.16.

It has the transmitting site of one of the most powerful AM radio stations in New Orleans, 50,000-watt WLNO, the former WNOE-AM. WLNO's seven-tower directional array is located on the west side of Woodland Highway just north of Belle Chasse Highway.

All content from Kiddle encyclopedia articles (including the article images and facts) can be freely used under Attribution-ShareAlike license, unless stated otherwise. Cite this article:
Belle Chasse, Louisiana Facts for Kids. Kiddle Encyclopedia.