Belle Harbor is a small residential neighborhood in the New York City borough of Queens, located on the western half of the Rockaway Peninsula, the southernmost area of the borough. Belle Harbor commonly refers to the area from Beach 126th to Beach 141st Streets.

The neighborhood is part of Queens Community Board 14. According to the 2010 United States Census, the neighborhood, coupled with nearby Neponsit, had a population just over 5,400. Belle Harbor was the site of the 2001 crash of American Airlines Flight 587, which killed 265 people.

The opening of passenger railroad service in 1880 to Rockaway Park from Long Island City and from Flatbush Terminal (now Atlantic Terminal) in downtown Brooklyn, via the Long Island Rail Road's Rockaway Beach Branch, facilitated population growth on the Rockaways Peninsula.

The makings of Belle Harbor began in 1900, when a New York State judge ordered that the land west of Rockaway Park be put up for auction. The area that makes up Belle Harbor and the neighboring community of Neponsit was bought by Edward P. Hatch, who after a couple years, sold it to the West Rockaway Land Company in 1907. The president of the company, Frederick J. Lancaster, who had earlier developed the Edgemere neighborhood, officially gave the community its name. Prior to Lancaster's acquisition of the land, however, a group of men wishing to form a yacht club entered into a grant agreement with the West Rockaway Land Company in 1905. The group, which had named itself the Belle Harbor Yacht Club, bought property from the company for four-thousand dollars. The agreement included two-hundred square feet of land and thirty plots of upland. That same year, the group received corporation status by the State of New York, and by 1908 began participating in its first inter-club ocean races with some of the city's other yacht clubs.

On November 12, 2001, American Airlines Flight 587, bound for Santo Domingo in the Dominican Republic, crashed in the center of Belle Harbor, killing all 260 passengers and crew on board the plane, as well as five people on the ground. Many of the passengers on the plane were from the Dominican community in Washington Heights. After consultation with families in the Belle Harbor and Washington Heights communities, a memorial was erected at Beach 116th Street in Rockaway Park, a major shopping district and transportation hub in the area, making it accessible to all. Although a temporary memorial was developed at the actual site of the disaster, on Newport Avenue, many still annually gravitate toward that area for commemoration. In 2001, a resident stated to The Guardian: "It's impossible to understand unless you live here ... Father Michael Geraghty, a priest quoted in the same article, said that it was common for people to live in the houses that their parents lived in and that many families lived in the same houses for generations. The neighborhood suffered heavy losses from the September 11, 2001, terrorist attacks."

Belle Harbor is a suburban enclave on the Rockaway Peninsula, on a narrow barrier peninsula sandwiched between the Atlantic Ocean to the south and Jamaica Bay to the north. It is further bordered by the neighborhood of Neponsit to the west and Rockaway Park to the east. Expansive views of the Manhattan skyline can be seen across the bay. Broad, white sandy beaches have drawn residents to the area. Although the beach is ostensibly open to the public, rigorously enforced street parking restrictions in effect on weekends and holidays from May 15 to September 30, combined with limited direct access to the insular area via public transportation, limits access for non-residents. 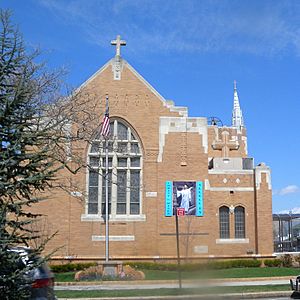 Belle Harbor is primarily made up of single-family homes with a majority of third and fourth generation Irish Catholic upper class residents. The community also has Italian-American and Jewish American populations, and is home to a large number of New York City police officers and firefighters, both active and retired.

All content from Kiddle encyclopedia articles (including the article images and facts) can be freely used under Attribution-ShareAlike license, unless stated otherwise. Cite this article:
Belle Harbor, Queens Facts for Kids. Kiddle Encyclopedia.