Breezy Point is a neighborhood in the New York City borough of Queens, located on the western end of the Rockaway peninsula, between Rockaway Inlet and Jamaica Bay to the north and the Atlantic Ocean to the west and south. The community is run by the Breezy Point Cooperative, in which all residents pay the maintenance, security, and community-oriented costs involved with keeping the community private. The cooperative owns the entire 500-acre (2 km2) community; residents own their homes and hold shares in the cooperative.

It is less urbanized than most of the rest of New York City, and it is part of Queens Community District 14. Breezy Point is patrolled by the 100th Precinct of the New York City Police Department; its ZIP Code is 11697.

However, according to the United States Census Bureau, the community's ZIP Code (11697) is 98.2% white and has the nation's 2nd highest concentration of Irish-Americans, at 60.3% as of the United States Census, 2000 (Squantum, in Quincy, Massachusetts, is number 1, at 65%). The community's demographics are maintained as a result of a Cooperative rule that a person, prior to buying a house, must be recommended by three members of the Cooperative and approved by its board of directors. Breezy Point functions mainly as a summer get-away for many residents of New York. Estimates put summer residency at 12,000, while year-round residency was 4,337 in the most recent Census. 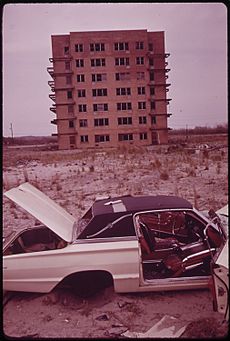 The community began as summer beach bungalows, in the "early 1900s", according to the New York Times. Breezy Point was sold to the Atlantic Improvement State Corporation for $17 million in 1960. The residents of the community purchased half of the land for approximately $11 million and formed the Breezy Point Cooperative. Today, it consists of about 3,500 homes. The construction of apartment buildings commenced in the late 1960s and was halted by City ordinance.

Breezy Point is patrolled by its own private security force that restricts access to owners, renters and their guests. It also features three of New York City's nine remaining volunteer fire departments.

On September 8, 2012, the community was struck by a tornado shortly before 11 a.m. that started as a waterspout over the Atlantic Ocean and came ashore at the Breezy Point Surf Club. 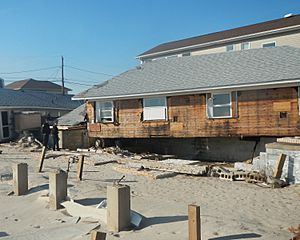 On October 29, 2012, Breezy Point was hit hard by Hurricane Sandy. Jamaica Bay and the Atlantic Ocean flooded the land between these bodies of water. Most Breezy Point homes were damaged or destroyed by high water. Residents lost everything in their basements, and hundreds of vehicles were ruined by the storm. One car caught fire when someone tried to start the vehicle. Residents put the fire out before help arrived.

At 10 pm, a six-alarm fire was reported at 173 Ocean Avenue. Local volunteer firefighters were trapped in place for several hours due to the flooding. Once the waters receded, the Rockaway Point Fire Department rescued more than 41 civilians. FDNY was delayed getting into Breezy due to the high flood levels. Roxbury FD extinguished fires by the promenade. Rockaway Point and Roxbury are located on the ocean side. Rockaway Point lost all of its rigs due to high water, and helped Roxbury with its lines. They found 130 homes burned to the ground. Nearby, another 50 homes were damaged by the fire. According to an official report in December, rising seawater caused the fire by contacting a house's electrical wires. 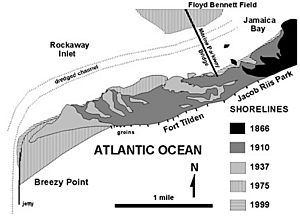 According to the United States Fish and Wildlife Service, beaches on the Breezy Point peninsula are home to one of the most diverse breeding shorebird areas in the Metropolitan area. Shorebirds that breed here include:

Notable current and former residents of Breezy Point include:

All content from Kiddle encyclopedia articles (including the article images and facts) can be freely used under Attribution-ShareAlike license, unless stated otherwise. Cite this article:
Breezy Point, Queens Facts for Kids. Kiddle Encyclopedia.