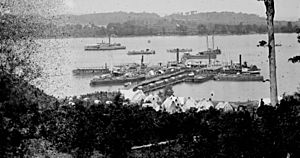 Belle Plains, Virginia (sometimes spelled as Belle Plain) was a steamboat landing and unincorporated settlement on the south bank of Potomac Creek off the Potomac River, in Stafford County, Virginia.

In the early 19th-century, Belle Plains served as landing for steamboats to Washington, D.C. The landing and its hotel were in turn was serviced by stagecoaches running to and from nearby Fredericksburg, Virginia where passengers would connect with the Richmond, Fredericksburg, and Potomac Railroad. Bell Plains and Potomac Creek fell by the wayside when the railroad bypassed them, reaching Aquia Landing on Aquia Creek as its terminus wharf in 1842.

All content from Kiddle encyclopedia articles (including the article images and facts) can be freely used under Attribution-ShareAlike license, unless stated otherwise. Cite this article:
Belle Plains, Virginia Facts for Kids. Kiddle Encyclopedia.