Belmont is a suburb of the city of Durham, England. It was formerly a coal mining village and is north-east of the city centre, just east of the A1(M) motorway. At the 2011 census, it had a population of 8,881.

The secondary school located here Belmont Community School was originally planned to be turned into an academy. However, a large portion of the staff protested against this, causing the school to stay the same.

The Church was bombed in the Second World War because the German pilots mistook it for Durham Cathedral (in the fog). 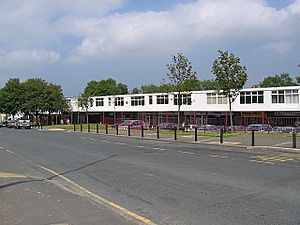 The village is on the bus route from Sunderland to Durham. There are three pubs, two school sites and a church, St. Mary Magdelene. Since 1994 Belmont has been the site of New Ferens Park, home of Unibond League (and former Football League) club Durham City AFC. It also contains Chevely Park shopping centre which includes shops such as Spar, Cooplands and other food establishments.

Since 2014 Belmont has been the site of New Ferens Park, home of FA Women's Championship club Durham Women's F.C..

On the site of present day housing south of Broomside Lane and on the east side of the cemetery was Belmont Stadium, which existed as a greyhound racing stadium from 1940 until 1969.

All content from Kiddle encyclopedia articles (including the article images and facts) can be freely used under Attribution-ShareAlike license, unless stated otherwise. Cite this article:
Belmont, County Durham Facts for Kids. Kiddle Encyclopedia.