Dorsey was responsible for gaining the land on which the town was built and coal mining rights. When it came time to name the village, he took the combination of his first name and his middle and last initial.

There were 676 households, of which 26.6% had children under the age of 18 living with them, 46.3% were married couples living together, 11.8% had a female householder with no husband present, and 38.5% were non-families. 34.0% of all households were made up of individuals and 20.9% had someone living alone who was 65 years of age or older. The average household size was 2.28 and the average family size was 2.89. 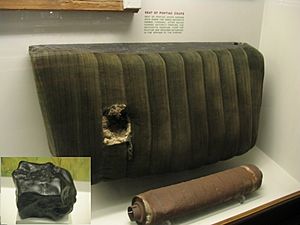 Photo of the car seat and muffler hit by the Benld meteorite with the meteorite inset.

On September 29, 1938, a meteorite landed in Benld, marking only the third meteorite landing in Illinois since records were kept. The meteorite was also one of the few known meteorites to strike a man-made object, punching a hole in the roof of Edward McCain's garage and embedding itself in the seat of his 1928 Pontiac Coupe. A neighbor, Mrs. Carl Crum, was standing about fifty feet from the impact and may be the individual who came closest to being struck by a meteorite in history up to that time. The meteorite and portions of the car are now on display at the Field Museum of Natural History in Chicago.

In March 2009, the 7 year old Benld Elementary school was damaged beyond repair and ultimately condemned. This damage was caused by mine subsidence. This left 700+ students without a school. The students were then moved to the Gillespie High School and Middle School campus where they finished the remainder of the year on a split shift schedule. High school and middle school students attended school from 6:30am -Noon and elementary aged students attended from 12:30pm until 5:00pm. The students started the 2010 school year on the split shift. November 2, 2010 all students returned to a normal schedule with the elementary kids now attending class in 3 different locations.(modular units, middle school classrooms & the S.S. Simon & Jude Catholic School) The district was only allowed to collect $350,000 in mine subsidence insurance due to limits imposed by the state of Illinois. The district is in line to receive funding from the Capital Development Board to help with the construction of a new elementary school. The school is responsible for 20% of the $22million budget to build a new school. The school district is actively pursuing grants to fulfill their responsibility. The Ben-Gil Boosters, an organization formed to help raise funds for the construction of the new school, won $250,000 in April 2010 through Pepsi's Refresh Everything Campaign. The new school is adjacent to the district's middle school and high school in Gillespie, Illinois. Its name has been changed to Ben-Gil Elementary School, to reflect both communities.

All content from Kiddle encyclopedia articles (including the article images and facts) can be freely used under Attribution-ShareAlike license, unless stated otherwise. Cite this article:
Benld, Illinois Facts for Kids. Kiddle Encyclopedia.