Bennington is a town in Hillsborough County, New Hampshire, United States. The population was 1,476 at the 2010 census.

The main village of the town, where 381 people resided at the 2010 census, is defined as the Bennington census-designated place (CDP), and is located on the Contoocook River at the intersection of New Hampshire routes 31 and 47.

Situated in an area once called Society Land, the town was formed from parts of Deering, Francestown, Greenfield and Hancock. It was named to commemorate the 1777 Battle of Bennington, an American Revolutionary War battle fought in New York near Bennington, Vermont. Bennington, Vermont in turn derived its name from New Hampshire governor Benning Wentworth. The town was incorporated in 1842. The first census, taken in 1850, recorded 541 residents.

Located at the Great Falls of the Contoocook River, which drop 70 feet (21 m) over 1.2 miles (1.9 km), Bennington provided water power for mills. The first gristmill was built in 1782, with a cotton mill in 1810. A tannery and tool manufacturing industry would follow. A factory with paper-making machinery was established in 1835, located at or near the site of the present-day Monadnock Paper Mill. In 1858, the town's industries included a cutlery manufacturer, a gristmill, 2 paper mills and a sawmill. Bennington also had quite a number of farms.

In 1874, plans were underway to build the Peterborough and Hillsborough railroad through Bennington.

According to the United States Census Bureau, the town has a total area of 11.3 square miles (29 km2), of which 11.1 sq mi (29 km2) is land and 0.3 sq mi (0.78 km2) is water, comprising 2.30% of the town. Bennington is drained by the Contoocook River, which forms Powder Mill Pond on the southern boundary. The highest point in Bennington is 2,020 feet (620 m) above sea level on Crotched Mountain, whose 2,066-foot (630 m) summit lies just east in Francestown. Bennington lies fully within the Merrimack River watershed.

The town is crossed by U. S. Route 202 and state routes 31 and 47. It borders the towns of Deering to the northeast, Francestown to the east, Greenfield to the south, Hancock to the southwest, and Antrim to the west and north. 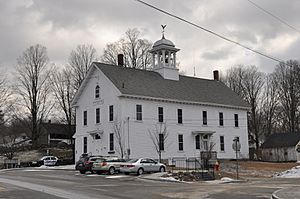 There were 552 households out of which 34.1% had children under the age of 18 living with them, 52.0% were married couples living together, 8.0% had a female householder with no husband present, and 35.5% were non-families. 26.8% of all households were made up of individuals and 5.4% had someone living alone who was 65 years of age or older. The average household size was 2.54 and the average family size was 3.18. 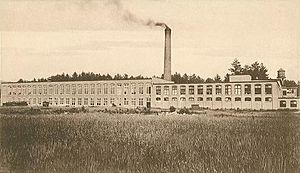 All content from Kiddle encyclopedia articles (including the article images and facts) can be freely used under Attribution-ShareAlike license, unless stated otherwise. Cite this article:
Bennington, New Hampshire Facts for Kids. Kiddle Encyclopedia.