Benty Grange is a Site of Special Scientific Interest in the parish of Monyash in Derbyshire, England. 21.1 ha (52 acres) in size and with at least four species of grass and ten others of plant, it is considered of national importance as one of the largest areas of unimproved species-rich neutral lowland grassland in the Peak District National Park. The area was confirmed as a Site of Special Scientific Interest on 8 March 2013, following notification of the designation on 19 June 2012.

Benty Grange is also the site of a large Anglo-Saxon barrow which on 23 October 1970 was listed as a scheduled monument. It was excavated on 3 May 1848 by the English antiquarian Thomas Bateman, who discovered a richly furnished burial which included the Benty Grange helmet. The list entry for the barrow notes that other than this excavation, it is "undisturbed and retains significant archaeological remains."

Notification of the designation as a Site of Special Scientific Interest was made on 19 June 2012. It was confirmed on 8 March 2013, over the objections of Woolley and five other parties in his support. 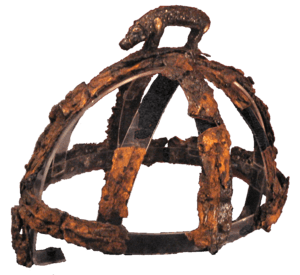 Benty Grange also contains an Anglo-Saxon barrow which was designated a scheduled monument on 23 October 1970. The barrow has three elements: a central mound approximately .6 m (2 ft) high and 15 m (49 ft) in diameter, a surrounding fosse about .3 m (1 ft) deep and 1 m (3.3 ft) wide, and penannular outer banks around .2 m (0.66 ft) high and 3 m (10 ft) wide. Taken together, the entire barrow is approximately 23 by 22 m (75 by 72 ft). It was excavated on 3 May 1848 by English antiquarian Thomas Bateman, who discovered the Benty Grange helmet and the Benty Grange hanging bowl among the remains of a richly furnished burial. Historic England notes in the list entry for the barrow, however, that other for than Bateman's excavation the barrow is "undisturbed and retains significant archaeological remains", and that further investigation would return new information.

All content from Kiddle encyclopedia articles (including the article images and facts) can be freely used under Attribution-ShareAlike license, unless stated otherwise. Cite this article:
Benty Grange Facts for Kids. Kiddle Encyclopedia.