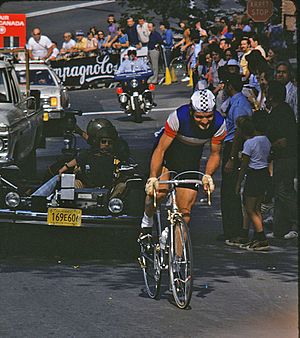 Bernard Thévenet ( born 10 January 1948) is a retired French bicycle racer. His sporting career began with ACBB Paris. He is a two-time winner of the Tour de France and known for ending the reign of five-time Tour champion Eddy Merckx, though both feats are tarnished by Thévenet's later admission of steroids use during his career. He also won the Dauphiné Libéré in 1975 and 1976.

All content from Kiddle encyclopedia articles (including the article images and facts) can be freely used under Attribution-ShareAlike license, unless stated otherwise. Cite this article:
Bernard Thévenet Facts for Kids. Kiddle Encyclopedia.