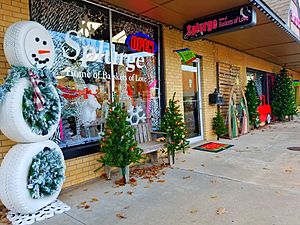 Photo taken during the Annual Tree Lighting Festival on December 17, 2017.

Bethany is a city in Oklahoma County, Oklahoma, United States, and a part of the Oklahoma City metropolitan area. The community was founded in 1909 by followers of the Church of the Nazarene from Oklahoma City.

Bethany was founded July 28, 1909 as a community where members of the Church of the Nazarene could express their religious beliefs without interference by non-members. The town was named after the biblical place of Bethany. The community quickly established the Oklahoma Holiness College (now Southern Nazarene University, SNU). two other institutions were soon established, the Oklahoma Orphanage (now the Children's Center, a medical facility) operated by Mattie Mallory, and the Nazarene Rescue Home for unwed mothers.

Bethany incorporated on August 8, 1910 as a rural town whose economy depended on the surrounding farmlands. It gained a post office on March 11, 1913. The relatively large population of Nazarenes soon caused the town to enact strict blue laws that banned alcohol, tobacco, gambling, dancing, movies, swearing, and working on Sundays. The blue laws have been relaxed since Bethany reorganized as a first class city in 1931. An F4 tornado nearly wiped out Bethany on November 19, 1930, killing 23 people and destroying 652 buildings. It is one of only three documented violent November tornadoes in Oklahoma since 1900. Recovery from the storm was slow until the outbreak of World War II, when the city began developing as a bedroom community for Oklahoma City.

The city is in the central part of Oklahoma County, about 10 miles (16 km) west of downtown Oklahoma City, and is bounded by Warr Acres on the east and by Lake Overholtzer and Stinchcomb Wildlife Refuge on the west.

According to the United States Census Bureau, the city has a total area of 5.2 square miles (13 km2), all of it land.

The main vehicular route in and out of Bethany is the 39th Street Expressway (part of Historic Route 66), which runs through downtown Bethany.

The Bethany parks and recreation system includes many small neighborhood parks, and four large parks, Eldon Lyon Park, McFarland Park, Ripper Park, and Stinchcomb Wildlife Refuge. Eldon Lyon Park is the venue for the Bethany Family Fun Festival, an all-day event, and fireworks each Fourth of July. Bethany has hosted an annual Balloon Fest, and the Children's Center has attracted crowds with the Christmas Wonderland Festival of Lights.

The largest employers in the area include: Southern Nazarene University, Southwestern Christian University, The Children's Center, Bethany and Putnam City Public Schools, City of Bethany, and Gilbert Medical Clinic. Bethany became the headquarters for the International Pentecostal Holiness Church in 1975. It is also the headquarters for the Pinto Horse Association of America.

All content from Kiddle encyclopedia articles (including the article images and facts) can be freely used under Attribution-ShareAlike license, unless stated otherwise. Cite this article:
Bethany, Oklahoma Facts for Kids. Kiddle Encyclopedia.