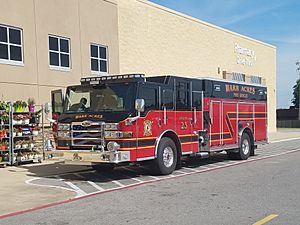 Warr Acres is a city in Oklahoma County, Oklahoma, United States, and a part of the Oklahoma City metropolitan area. It was established after World War II by C.B. Warr, a dynamic businessman, builder, and commercial developer. The population was 10,043 at the 2010 census.

The city lies within the Putnam City School District district.

The Warr Acres housing addition and Warr Acres Second Addition was developed in 1937 by Clyde B. Warr. An addition that would later form part of the city of Warr Acres, Putnam City was developed by state lawmaker Israel Putnam in 1909.

The city formed when the residents of 11 additions, including Putnam City, petitioned to incorporate in February 1948. The city of Bethany filed suit, but lost in an Oklahoma Supreme Court decision.

Shopping districts appeared along MacArthur Avenue in the 1960s and 1970s. By 1979, the town had grown to three square miles after annexing several residential developments.

Warr Acres has a humid subtropical climate, with variations in weather daily and seasonally, except during summer, which is consistently hot and humid. Central Oklahoma is subject to droughts and heavy rainfall leading to flash flooding and flooding. Consistent winds help cool the summers and can lead to winter ice storms. Warr Acres is in the center of Tornado Alley and is prone to frequent and severe tornadoes. The Oklahoma City metropolitan area is one of the most tornado-prone major cities in the world. More than 150 tornadoes have stricken within the city limits since 1890, including eight EF4s and one EF5.

According to the 2010 U.S. Census, the racial composition of Oklahoma City was as follows:

The City of Warr Acres has a mayor-council form of government.

The city is serviced by the Putnam City School District.

All content from Kiddle encyclopedia articles (including the article images and facts) can be freely used under Attribution-ShareAlike license, unless stated otherwise. Cite this article:
Warr Acres, Oklahoma Facts for Kids. Kiddle Encyclopedia.