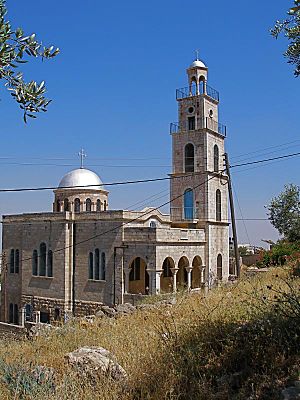 The Greek Orthodox church in al-Eizariya, near the traditional tomb of Lazarus of Bethany.

Bethany is a place mentioned in the New Testament of the Bible. It was a village near Jerusalem. It is now in the West Bank, and is often thought to be the modern-day town of al-Eizariya. It is also a girl's name meaning 'house of figs'.

All content from Kiddle encyclopedia articles (including the article images and facts) can be freely used under Attribution-ShareAlike license, unless stated otherwise. Cite this article:
Bethany Facts for Kids. Kiddle Encyclopedia.