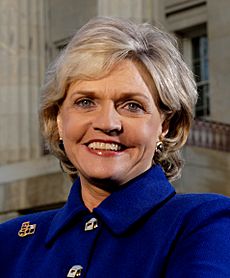 Beverly Eaves "Bev" Perdue (aka Beverly Marlene Moore; born January 14, 1947) is an American politician. She is a member of the US Democratic party. From January 2009 to 2013, she was Governor of the U.S. State of North Carolina. She was the first female governor in that state.

Because of declining approval ratings, in January 2012, Perdue said she would not do another term. In January of the following year, Pat McCrory became governor.

Perdue was born in Grundy, Virginia in 1947.

All content from Kiddle encyclopedia articles (including the article images and facts) can be freely used under Attribution-ShareAlike license, unless stated otherwise. Cite this article:
Bev Perdue Facts for Kids. Kiddle Encyclopedia.