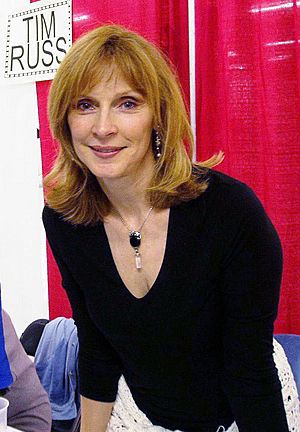 Doctor Beverly Crusher is a fictional character from the American science fiction television series Star Trek: The Next Generation The character is played by actress Gates McFadden. Crusher was born as Beverly Howard. She is a human medical doctor working for Starfleet. Crusher was the chief medical officer on the starships USS Enterprise-D and USS Enterprise-E. She had the military rank of Commander. Crusher had a husband, Jack Crusher (now dead), and one son, Wesley Crusher.

Doctor Crusher was born in Copernicus City, Luna (Earth's moon). When she was very young her parents died. After this, She lived with her grandmother on Arvada III, a colony planet. After joining Starfleet, she married Lieutenant Jack Crusher. He served with captain Jean-Luc Picard on the USS Stargazor. They had a son, Wesley Crusher. Jack Crusher was killed in an accident on the Stargazor in 2354. On the Enterprise-D, Crusher is a good friend with all the senior staff. She plays poker with them every week. Beverly is a good dancer. She has won many trophies in the past for dancing. She tries to keep this a secret because she did not want to be known as "the dancing doctor" as she used to be in the past.

All content from Kiddle encyclopedia articles (including the article images and facts) can be freely used under Attribution-ShareAlike license, unless stated otherwise. Cite this article:
Beverly Crusher Facts for Kids. Kiddle Encyclopedia.