The Bideford Railway Heritage Centre CIC (previously the Bideford and Instow Railway Group) in Devon, England, is responsible for the management of the Bideford station site. The Company is also responsible for Instow signal box which opens on occasional Sundays and bank holidays from Easter to October. 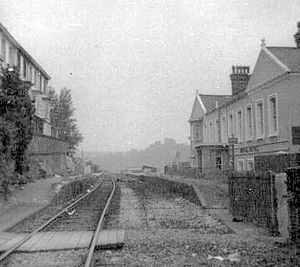 Passenger services ceased on 2 October 1965 although ball clay traffic continued until 1982. The track was removed in 1985 after some interest by BR in reintroducing a passenger service to Bideford. The trackbed was later converted into the Tarka Trail, a walkway using the formation between Petrockstow (later the terminus of services after the line was truncated in the 1960s) and Barnstaple Junction.

In 2009, James May attempted to reconnect the former Bideford station with Barnstaple Junction using an OO scale model train as part of James May's Toy Stories. Unfortunately, the last train - a Hornby Class 395 "Javelin", and the prototype model for the production models - burnt out at Instow at 12:18am the day after the trains left Barnstaple. In 2011, May returned to complete the challenge with the help of the German model railway attraction Miniature Wonderland, racing several model trains over the 9.89 miles (15.92 km) from Barnstaple to Bideford. The first train to arrive at Bideford was a Hornby Intercity 125, followed by a hydrogen-powered train and finally, May's own model of LNER 'Pacific' 4472 Flying Scotsman.

A local group has worked in partnership with Devon County Council since 1989 to ensure a preservation presence at the old Bideford station. A replica of the original signal box was built in 1992 and signal levers were installed later. An interactive interpretation centre was opened in the green PMV (Parcels and Miscellaneous Van) in 2019. Short passenger rides have been given at Bideford in the past but the Planet diesel locomotive is currently under extended maintenance. The site has now been fully renovated and is open from Easter to the end of October at weekends and school holidays. Tea on the Train is open in the Mark 1 coach at these times for walkers and cyclists on the Tarka Trail. The site is accessible from the Tarka Trail even when the station site is not open.

The Railway has a few pieces of rolling stock.

All content from Kiddle encyclopedia articles (including the article images and facts) can be freely used under Attribution-ShareAlike license, unless stated otherwise. Cite this article:
Bideford Railway Heritage Centre Facts for Kids. Kiddle Encyclopedia.