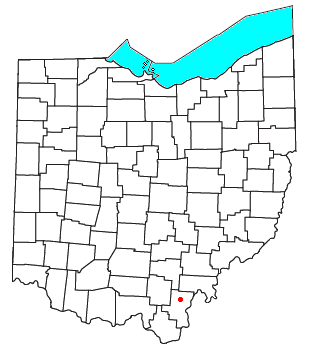 Bidwell is a small unincorporated community in northwestern Springfield Township, Gallia County, Ohio, United States, and is often associated with the nearby community of Porter. Although unincorporated, it has its own ZIP Code of 45614. Bidwell is located eleven miles from the county seat, Gallipolis, at an elevation of 682 feet (208 m).

The community of Bidwell was founded in 1881 under the name Heatly, after the arrival of the Columbus, Hocking Valley, and Toledo Railroad. Charles Heatly (1809-1888) owned the property where the new station was located. His home still stands nearby. Porter Station was built in Heatly as a means of transportation of passengers and freight, which led to its later expansion and the source of the name of the neighboring village of Porter. Circa 1900, Heatly changed its name to Bidwell in honor of John Bidwell, the Prohibition Party's presidential candidate in 1892.

The village expanded in the early 20th century, eventually including several mills and stores. The railroad tracks have since been decommissioned and turned into a bicycle path that spans much of Gallia County, but the former site of the station itself is commemorated by an Ohio historical marker.

The Bidwell area contains two shopping centers, one containing a hardware store, a Save-A-Lot grocery store, a video rental & tanning store, and the other containing a Dollar General store. Two restaurants serve the community, the Korner Deli and the Wounded Goose. There are no lodging or other accommodations in Bidwell.

Public education in Bidwell is provided by the Gallia County Local School District. Two of the district's schools are located in the community. River Valley Middle School is a sixth to eighth grade school, and has an enrollment of approximately 400 students. Elementary students from Bidwell attend Vinton Elementary School. There is also a high school in the area, River Valley High School, which is located behind the middle school. The high school serves students from across the northern half of Gallia County, including the communities of Vinton and Cheshire.

The Bidwell area does not have a police force of its own, and is instead patrolled by the Gallia County Sheriff's Department. However, local fire protection is provided by the Springfield Township volunteer fire department. Most funding for the station is received from tax levies.

All content from Kiddle encyclopedia articles (including the article images and facts) can be freely used under Attribution-ShareAlike license, unless stated otherwise. Cite this article:
Bidwell, Ohio Facts for Kids. Kiddle Encyclopedia.