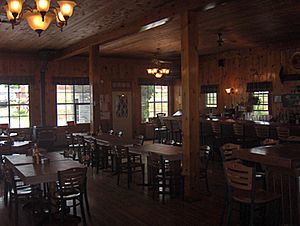 Interior of the Thunder Bay Inn

Big Bay is an unincorporated community in Marquette County of the U.S. state of Michigan. It is a census-designated place (CDP) for statistical purposes and does not have any legal status as an incorporated municipality. As of the 2000 census, the CDP population was 265. The community is located within Powell Township near the shore of "Big Bay" on Lake Superior.

Although the Big Bay community is served by the Marquette ZIP code 49855, the Big Bay post office with ZIP code 49808, serves a much larger area to the west and south of the community and CDP, including portions of Powell Township as well as Ishpeming, Champion, Michigamme, and Ely townships.

Big Bay was established in 1875 by people involved in the lumber industry.

There were 129 households out of which 15.5% had children under the age of 18 living with them, 59.7% were married couples living together, 3.9% had a female householder with no husband present, and 32.6% were non-families. 28.7% of all households were made up of individuals and 13.2% had someone living alone who was 65 years of age or older. The average household size was 2.05 and the average family size was 2.47.

Big Bay's "claim to fame" is the filming of Anatomy of a Murder in 1959. Filming took place at the Thunder Bay Inn, the Big Bay Lighthouse Bed and Breakfast, the Lumberjack Tavern (scene of the real 1952 crime on which the film is based), Perkins Park Campground, and various other locales.

Bay Cliff Health Camp is located in Big Bay. It is a year-round, non-profit wellness camp for children and adults.

This climatic region is typified by large seasonal temperature differences, with warm to hot (and often humid) summers and cold (sometimes severely cold) winters. According to the Köppen Climate Classification system, Big Bay has a humid continental climate, abbreviated "Dfb" on climate maps.

All content from Kiddle encyclopedia articles (including the article images and facts) can be freely used under Attribution-ShareAlike license, unless stated otherwise. Cite this article:
Big Bay, Michigan Facts for Kids. Kiddle Encyclopedia.