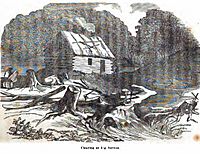 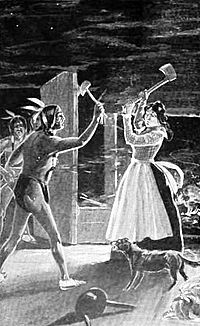 Wife of Isaac Meeks resisting during the massacre at Big Bottom

The Big Bottom massacre occurred on January 2, 1791, near present-day Stockport now in Morgan County, Ohio, United States. It is considered part of the Northwest Indian Wars, in which aboriginal Americans in the Ohio Country confronted American settlers, regular soldiers and militia, seeking to expel them from their territory.

Following the American Revolutionary War, the United States government was selling land in the Ohio Country, mostly to companies that promised to develop it. A group of squatters had moved up to this area and settled along flood plain, or "bottom" land, of the Muskingum River, some 30 miles north of an Ohio Company of Associates settlement at Marietta, Ohio. The settlement was raided by Lenape and Wyandot warriors seeking to expel the interlopers. They stormed the incomplete blockhouse and killed eleven men, one woman, and two children. (Accounts vary as to the number of casualties.) The aborigines captured three settlers, with at least one dying later, while four others escaped into the woods.

The Ohio Company of Associates sought to provide greater protection for settlers in the Northwest Territory, as the conflicts became more widespread. A coalition of aboriginal American tribes fought to expel the newcomers and preserve their lands. The war did not end until 1794.

The Ohio History Connection manages the three-acre Big Bottom Park site, which has been listed on the National Register of Historic Places. In addition to the markers noted below, the site features a twelve-foot marble obelisk, picnic tables, and information signs about the site's history.

In the Gnadenhutten Massacre of 1782, Revolutionary militia forces had killed ninety-six unarmed Christian Lenape men, women and children, although this group were considered friendly and were neutral in the war. The attack took place at their Gnadenhutten settlement on the northern part of the Muskingum River. The terminus of this river was south at the Ohio. Later in 1789, the Treaty of Fort Harmar was signed between the United States and what an American recorded as an "... unrepresentative gathering of undistinguished chiefs ..."

At the same time, the United States government sold off vast tracts of land in the Ohio Country to raise money after the war and satisfy the desires of numerous settlers for lands across the Appalachian Mountains. Tensions increased as American settlers began entering the area. The Ohio Company of Associates, formed by a group of several New England veterans of the American Revolution, organized for land speculation and development. They purchased approximately 1,500,000 acres (6,100 km2) in the Northwest Territory from the United States in 1787, but their purchases were not patented by Congress until 1792. Early settlers on these lands followed national guidelines for settling the West and respected the government a great deal, likely because of their role in the Revolution.

The founders of the Ohio Company promoted orderly and nationalistic western expansion. The founders of the company began to worry about problems that arose as more individuals bought into the land company, and began to assert their own goals by striking out into territory where the Company did not have title. Armed confrontations with aboriginal tribes threatened the Company's settlement at Marietta.

A financial crisis in New York was hurting the investors as well as the company treasury. The company struggled to integrate interests between settlers and investors in the East and those in the West. The Company's power structure favored the Eastern part of the territory, and settlers in the West were not well represented. Westerners wanted protection from Indians, but funds were low and the Ohio company refused. Armed conflict soon broke out between settlers and the aboriginal American tribes who wanted to expel them.

Attack by Lenape and Wyandot warriors

A group of about thirty-six Company settlers had gone upriver from Marietta, squatting east of the Muskingum on land where the Company did not hold title. Tensions were rising with indigenous Americans in the area. In late December 1790, Colonel William Stacy, a war veteran, ice skated 30 miles up the frozen Muskingum River to warn two of his sons at the Big Bottom settlement about the risk of an attack.

Several days later on January 2, 1791, the settlement was raided from the north by Lenape and Wyandot warriors, who killed several settlers. Whites have called this the Big Bottom Massacre. According to the Ohio Historical Society, nine men, a woman and two children were killed in the attack. Colonel Stacy's sons, John Stacy and Philip (Philemon) Stacy, were among the casualties. John was killed directly in the attack, and Philemon was taken captive, dying later.

The attack led to United States retaliation. Conflicts continued in the Northwest Indian Wars, in which a coalition of aboriginal American tribes tried to expel American settlers from this territory. They were finally defeated in 1794 in the Battle of Fallen Timbers.

On April 21, 1792, Congress authorized the Donation Tract, an area of 100,000 acres located along the northern border of the Ohio Company lands, hoping to rapidly create a buffer zone sheltering Ohio Company lands from aboriginal incursions. Congress offered a 100-acre lot free to any male, eighteen or older, who "would actually settle on the land at the time the deed was conveyed."

A marker at the site posted by the Ohio Historical Society, reads:

Big Bottom Massacre
Following the American Revolution, the new Federal government, in need of operating funds, sold millions of acres of western lands to land companies. One such company, the Ohio Company of Associates, brought settlement to Marietta in 1788. Two years later, despite warnings of aboriginal American hostility, an association of thirty-six Company members moved north from Marietta to settle "Big Bottom," a large area of level land on the east side of the Muskingum River. The settlers were acquainted with aboriginal American warfare, but even so, built an unprotected outpost. They did not complete the blockhouse, put pickets around it, or post a sentry. On Jan 2, 1791, a war party of twenty-five Delaware and Wyandot men from the north attacked the unsuspecting settlers, killing nine men, one woman and two children. War raged throughout the Ohio Country until August 1794 when the tribes were defeated at the Battle of Fallen Timbers.

The city of Stockport has posted a third sign at the site, reading:

Big Bottom, named for the broad Muskingum River Flood Plain, this park is the site of an attack on an Ohio Company settlement by Delaware and Wyandot Indians on Jan 2, 1791. The Big Bottom Massacre marked the outbreak of four years of frontier warfare in Ohio, which only stopped when General Anthony Wayne and the Indian Tribes signed the Treaty of Greenville.

All content from Kiddle encyclopedia articles (including the article images and facts) can be freely used under Attribution-ShareAlike license, unless stated otherwise. Cite this article:
Big Bottom massacre Facts for Kids. Kiddle Encyclopedia.