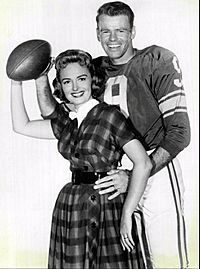 William James "Bill" Wade (October 4, 1930 – March 9, 2016) was an American football quarterback. He played professionally in the National Football League (NFL). He was thought as one of the greatest athletes in Nashville and Vanderbilt University history.

Wade was a member of the Tennessee Sports Hall of Fame. He was best known for being the starting quarterback on the Chicago Bears' 1963 NFL championship team. He also played for the Los Angeles Rams.

All content from Kiddle encyclopedia articles (including the article images and facts) can be freely used under Attribution-ShareAlike license, unless stated otherwise. Cite this article:
Bill Wade Facts for Kids. Kiddle Encyclopedia.