William George Martin (born in 1981) is an American musician and songwriter. He is the rhythm guitarist and keyboardist of rock band Good Charlotte.

Martin started his first band, Overflow, with Steve Sievers, who later helped Martin run his clothing line, Level 27. In December 2009, Martin liquidated his clothing company Level 27, saying that it was a great outlet for his artistic whims, it had served its purpose and would not be kept going as a clothing brand. He also appeared with his band mates in the 2001 film Not Another Teen Movie and the television special iCarly iGo to Japan.

On March 1, 2008, Martin married hairstylist Linzi Williamson, whom he had been dating for eight years. On January 26, 2009 she gave birth to their first child Dreavyn Kingslee Martin in Pasadena, California. 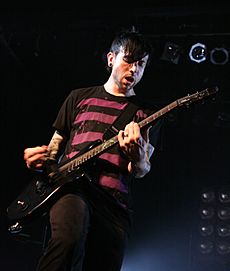 All content from Kiddle encyclopedia articles (including the article images and facts) can be freely used under Attribution-ShareAlike license, unless stated otherwise. Cite this article:
Billy Martin (guitarist) Facts for Kids. Kiddle Encyclopedia.