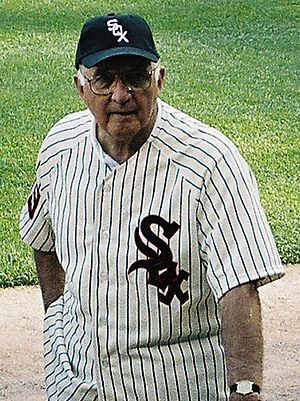 He was selected to the Chicago White Sox All-Century Team in 2000. Pierce was an All-Star for seven seasons.

Pierce was born in Detroit, Michigan. He was raised in Highland Park, Michigan. Pierce died in Chicago, Illinois from gallbladder cancer, aged 88.

All content from Kiddle encyclopedia articles (including the article images and facts) can be freely used under Attribution-ShareAlike license, unless stated otherwise. Cite this article:
Billy Pierce Facts for Kids. Kiddle Encyclopedia.