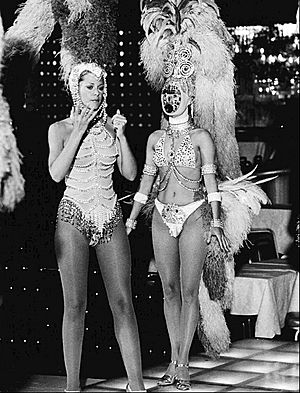 Jaime poses as a Las Vegas showgirl to gather information on the Fembot army of an evil scientist.

Wagner stars as professional tennis player Jaime Sommers, who becomes critically injured during a skydiving accident. Jaime's life is saved by Oscar Goldman (Richard Anderson) and Dr. Rudy Wells (Alan Oppenheimer) with bionic surgical implants similar to those of The Six Million Dollar Man Steve Austin (Lee Majors). Through the use of cybernetic implants, known as bionics, Jaime is gifted with an amplified bionic ear which allows her to hear at low volumes and at different frequencies from most humans and over uncommonly long distances. She also has extraordinary strength in her bionic right arm and in both legs that enables her to run at speeds exceeding 60 miles per hour. She is then assigned to spy missions of her own as an occasional agent of the Office of Scientific Information, while under the employment cover as a school teacher of middle school students.

The series proved highly popular worldwide, gaining high ratings in the US and particularly so in the UK (where it became the only science fiction programme to achieve the No.1 position in the ratings during the 20th century). The series ran for three seasons, from 1976 to 1978, first on the ABC network and then the NBC network for its final season. Years after its cancelation, three spin-off TV movies were produced between 1987 and 1994. Reruns of the show aired on Sci-Fi Channel from 1997 to 2001. A remake of the series was produced in 2007.

The character of Jaime Sommers first appears in a two-part episode of The Six Million Dollar Man in 1975 titled "The Bionic Woman". In the first episode, Steve travels to his old hometown of Ojai, California, to buy a ranch that is for sale and to visit his mother and stepfather. During his visit, he rekindles his old relationship with Jaime Sommers, now one of America's top tennis players. Their relationship progresses rapidly to the point where Steve proposes marriage.

During an outing, Steve and Jaime take part in skydiving. Jaime's parachute malfunctions and she plummets to the ground, falling through tree branches, hitting the ground and suffering traumatic injuries to her head, legs, and right arm. Steve then makes an emotional plea to his boss, Oscar Goldman, to save Jaime's life by implementing bionics, even going so far as to commit Jaime to becoming an operative of the Office of Scientific Intelligence (OSI). Goldman agrees to assign Dr. Rudy Wells (played at this point in the series by Alan Oppenheimer) and the bionics team to rebuild her.

Jaime's body is reconstructed with parts similar to Steve's, but the actual cost of rebuilding her is not revealed. It is said humorously in dialogue to be less than the $6 million it cost to rebuild Austin because the replacement parts for her were "smaller" (though in Germany the show was called Die Sieben Millionen Dollar Frau, which translates as The Seven Million Dollar Woman). Jaime is given two bionic legs, capable of propelling her at speeds exceeding 60 mph (having been clocked at more than 62 mph in "Doomsday Is Tomorrow" and outpacing a race car going 100 mph in "Winning is Everything") and jumping to and from great heights, and her right arm is replaced by a lifelike prosthetic capable of bending steel or throwing objects great distances. Whereas Austin received a bionic eye, the inner mechanism of Jaime's right ear is replaced by a bionic device that gives her amplified hearing such that she can detect most sounds regardless of volume or frequency. These bionic implants cannot be distinguished from natural body parts, except on occasions where they sustain damage and the mechanisms beneath the skin become exposed, as seen in Part 2 of the episode "Doomsday Is Tomorrow", when Jaime sustained damage to her right leg. Jaime discovers on vacation in the Bahamas her artificial bionic skin cannot suntan with exposure to sunlight. It is also revealed in Part 2 of "Doomsday Is Tomorrow" that Jaime's artificial limbs don't perspire like normal human skin.

After Jaime recovers from her operation, Steve tries to break his agreement with Oscar that she will serve as an agent for OSI. Jaime agrees to undertake a mission for Oscar despite Steve's concerns. During the mission her bionics malfunction, and she experiences severe and crippling headaches. Dr. Wells determines that Jaime's body is rejecting her bionic implants and a massive cerebral clot is causing her headaches and malfunctions. Soon after, she goes berserk and forces her way out of the hospital. Steve pursues and catches her, and she collapses in his arms. Soon after, Jaime dies on the operating table when her body shuts down.

The character was so popular that ABC asked the writers to find a way to bring her back. In the first episode of the next season, it is revealed that Jaime had not died after all, but Steve was not told. He soon discovers the truth when he is hospitalized after suffering severe damage to his bionic legs; he sees Jaime before slipping into a coma.

As Steve later learns, Wells' assistant, Dr. Michael Marchetti, had urged Rudy (now played by Martin E. Brooks) to try his newly developed cryogenic techniques to keep Jaime in suspended animation until the cerebral clot could be safely removed, after which she was successfully revived. A side effect of the procedure causes Jaime to develop retrograde amnesia, preventing her from recalling previous events including her relationship with Steve. Any attempt to remember causes her headaches and pain. Steve reluctantly lets her go on to live her own life as an agent for the OSI, although the pair would frequently work together on missions and establish a new friendship.

Jaime, now retired as a tennis player, takes a job as a schoolteacher at an Air Force base in Ojai, California. She lives in an apartment over a barn located on the ranch owned by Steve's mother and stepfather, both of whom are aware of their bionic implants and their lives as secret agents. Season three opened with the two-part episode "The Bionic Dog", in which Jaime discovers Max (short for Maximillion), a German Shepherd dog that has been given a bionic jaw and legs who could run at speeds of up to 90 mph. His bionics pre-date Steve's and Jamie's, as he was a lab animal used to test early bionic prosthetics. He was named "Maximillion" because his bionics cost "a million" dollars. When he was introduced, he experienced symptoms suggesting bionic rejection and was due to be put to sleep. Jaime discovered the condition was psychological, stemming from a traumatic lab fire that injured him when he was a puppy. With Jaime's help, Max was cured and went to live with her, proving himself to be of considerable help in some of her adventures. The original intent was to create a spin-off series featuring The Bionic Dog, and at the end of the two-part episode that introduced him, it was implied Max would stay with Jaime's forest ranger friend Roger Grette in the Sierra Mountains and Jaime would visit occasionally. However, the network rejected the proposed spin-off series and Max stayed with Jaime instead, making several appearances throughout the third season of The Bionic Woman.

Three made-for-TV movies were produced that expanded the "bionic family" and explored a rekindled love between Jaime and Steve.

In the first reunion, The Return of the Six Million Dollar Man and the Bionic Woman (1987), Jaime and Steve are reunited after nearly ten years of living separate lives. Jaime's memory is fully restored (according to Oscar, Jaime was involved in an explosion at the American Embassy in Budapest and "she remembered everything" after she recovered from her concussion) and she tries to reconcile her feelings for Steve while at the same time helping train Steve's son Michael in the use of his own recently acquired updated bionics. Jaime challenges Michael to a friendly race. He overtakes her and she makes the comment that she feels like an "obsolete model". Michael is kidnapped by Fortress. Steve and Jaime along with the Air Force infiltrate the abandoned glass factory to "rescue" Michael.

In the final reunion film, Bionic Ever After? (1994), a computer virus corrupts Jaime's bionic systems. Dr. Wells informs Steve that "she may never be bionic again," but Steve's main regard is he wants her alive above all else. She undergoes a major upgrade, which not only increases the power of her bionics but gives her night vision. Finally, after so many years of waiting around, the bionic couple say their "I Dos".

The Bionic Woman board game

Like its parent program The Bionic Woman spawned its own line of toys. Kenner produced a 12-inch doll of the character, with similar features to the Steve Austin version (bionic modules and removable bionic limbs), except instead of a bionic eye the doll's head would click when turned, simulating the sound of Jaime's bionic ear. Accessories for the doll released by Kenner included additional fashions, and a Bionic Beauty Salon playset.

A metal lunchbox for children was available, as was a vinyl story record produced by Wonderland Records. Kenner produced a series of stickers and temporary tattoos featuring Jaime Sommers individually and with Steve Austin.

A board game based on The Bionic Woman series was also created. It was sold by Parker Brothers in the US, and was a 2–4 player game suited for children between 7 and 12 years of age.

In July 2016, prior to Comic-Con International, the New York Times ran a story about Dynamite Entertainment. In it, best-selling author Andy Mangels was revealed to be writing a prestigious new intercompany crossover mini-series for the company, in conjunction with DC Comics: Wonder Woman '77 Meets The Bionic Woman, bringing together the Lynda Carter television character with Lindsay Wagner's fellow 1970s television super-heroine. The series was released in December 2016.

All content from Kiddle encyclopedia articles (including the article images and facts) can be freely used under Attribution-ShareAlike license, unless stated otherwise. Cite this article:
Bionic Woman Facts for Kids. Kiddle Encyclopedia.