The first Bisto product, in 1908, was a meat-flavoured gravy powder, which rapidly became a bestseller in the UK. It was added to gravies to give a richer taste and aroma. Invented by Messrs Roberts & Patterson, it was named "Bisto" because it "Browns, Seasons and Thickens in One". It was sold in both tins and boxes. In the 1990s a chicken version was added. Since 1991, the word "Original" has appeared on Bisto gravy powder. In the 1960s bottom and top area of the Bisto cylinder were changed in color from silver to gold and in 1970s, the Bisto was in the round tin box. The Bisto drum was made 2 inches bigger, slightly bigger than it originally was, and slightly narrower in 1995, and in 2005 changed its top lid from metal with the original Bisto logo on it, to plastic. It also had the inner lid from paper to tinfoil, but still has a metal bottom usually 454g in size. In 2008, glossy paper which sealed them was abolished from the rectangle-shaped box of it on the outside. The Bisto packet were three sizes, 113g, 227g and 454g, until 2008. Currently, it is sold in only two sizes of 200g and 400g. There are plans for a Turkey version to go on sale from November 2020. In larger stores and Cash and Carry's may sell in Catering Packs. A return of the Onion version on sale during the late 1970's and early 1980's in future.

Bisto Granules, which dissolve in hot water to form a gravy substitute, was introduced in 1979. Originally called Rich Gravy Granules, Rich Gravy Granules with Real Meat Stock (1984-1991), Traditional Rich Gravy Granules (1991-1993), simply called Gravy Granules (1993-2005) and since 2013 or Favorite Gravy Granules (2005-2013), other flavors included to be Chicken and Onion were added in the 1980s, Turkey in the 1990s, Vegetable and Reduced Salt in the 2000s Reduced Salt Chicken in 2013 and Gluten-Free in 2017. As of 2005, Bisto Gravy Granules have a British market share over 70%. Nearly all British grocery outlets stock a Bisto product. They originally came in tins, but now come in a cardboard cylinder with a plastic lid. In 2019 Southern Style American, 2020 Gluten-Free Chicken version and in 2021 American Hot & Spicy was added and there are plans for a Lamb version in the future. They all come in 3 sizes of 170g, 350g and 550g. In 2020, Bisto Gluten Free Gravy Granules won the Lausanne Index Prize - Golden Award.

In 1991, Bisto launched a new, more expensive, beef-like granule. Packaged in a glass jar, it offered a fuller flavour than the standard granule. Originally had a Brown Label in 1992 changed to Red. Chicken and onion variants were added in 1993, and the whole range was relaunched as Bisto Best. But they also come in packets too.

In 1989 a British and Irish advert of Soup Packets with the 1982 hit Abracadabra was used.

In 1982 there was Bisto Welcome Soup lasted until 1985. Bisto went through phases of producing Soup during World War I and II.

Bisto also has a ready meal range produced by Kerry Group, under license from Premier Foods (the owner of the brand).

Bisto is notable both for the age of its brand and for the advertising campaigns it has used. In 1919, the Bisto Kids (created by illustrator Will Owen (1869–1957)) appeared in newspapers and soon became popular. The Bisto Kids were a boy and girl in ragged clothes, who would be illustrated catching the odour of Bisto on the breeze and exhale longingly, "Ah, Bisto!" 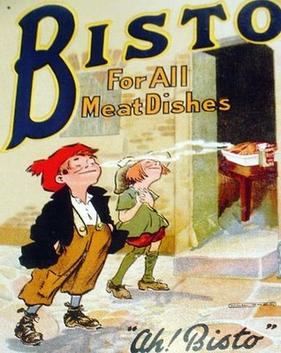 The Bisto Kids were also part of more elaborate advertising campaigns in later years. Although the Bisto Kids have not been included in Bisto advertising since 1996, many people still recognise them.

In Birmingham in the 1930s a competition was held to choose a name for the two Bisto twin characters, a boy and a girl smelling Bisto's gravy. The competition was won by Mr and Mrs Simmonds, who named the twins after themselves, calling them Bill and Maree. They were awarded a china doll.

During the 1950s "Bisto For All Meat Dishes" one of their first television advertisements.

During the 1960s "Pass The Gravy Pass The Bisto" or "Does Cooking Proud" at the end of the decade television adverts changed from Black and White to Color. Bobby Moore featured in the first color advert for Bisto gravy in 1969.

During the 1970s popular advert phrases were "Where there's Meat theres Bisto" or "Brown Seasons And Thickens All in One" popular series of family adverts shown on television to name but a few with Gordon Banks, Anita Harris, Henry Cooper, Clodagh Rodgers, Jimmy Savile in 1971 to John Pertwee, Billy Bremner, Dick Emery, Terry Wogan or Alan Ball in 1975.

During the 1980s, the company released a series of ads in the UK which featured a song that included the recurring phrases like, "You Can't Kid A Bisto Kid" adverts that featured 1) Sandcastles 1980, 2) Bisto kids jumping out the window in 1981 and 3) Family in 1982, "Much More Ahh" series with Lysette Anthony and Tarzan Monkey's and Ghosts in a Halloween edition, "Never in a month of Sundays" series of 3 adverts 1) Car in the 1983 advert, 2) Mole featured Chris Wilkinson in the 1984 advert and 3) Music Playing in 1985 advert, "Now You're Home" an advert with a bus and school dinners ran (1987-1990), "Only Bisto Puts The Ahh into Gravy", "Insist On Bisto" was a series of family adverts, rectory and bistro, "For A Winner Of A Dinner" shown in Ireland only in 1987 and "When It's Dry Let It Pour". In 1984 RHM Foods launched a nationwide competition to find children to act the role of the Bisto Kids, the recurrent "The Bisto Kids of the Year Awards". The first ever competition was won by Hayley Griffiths and Jimmy Endicott from Doncaster. They were six years old at the time and became the faces of Bisto, both for public relations and marketing events, and also appeared in an advert shown on prime time TV to find the next Bisto Kids.

Sponsored the ITV Telethon in 1988.

During the 1990s adverts for Bisto gravy included the Dean Martin classic single called Memories Are Made Of This other phrases were "Real Gravy in No Time at All", Vanessa Williams hit in series of adverts called Save the Best for Last for Bisto Best range series ran (1993-1996) and "It Put's The Ahh into A Meal" series (1990-1992) to name but a few even them a series with Julie Walters (1996-1998). In a 1993 advert for Bisto Fuller Flavour Gravy Granules a young couple for dinner on train featuring the Orient Express just before re branded as Bisto Best.

During the 2010s adverts including "Now You're Talking".

The company sponsors the Bisto Book of the Year Awards in the Republic of Ireland.

The latest campaign for Bisto encourages families to sit up at the table for one night a week to eat 'proper' food.

Bisto has had several owners since its creation. It is currently owned by Premier Foods, which acquired Bisto when it bought Rank Hovis McDougall in March 2007 to form the largest UK foods manufacturing company.

Bisto's main competitor is Goldenfry Foods Ltd, which makes a branded gravy as well as most supermarket own-brand gravies.

All content from Kiddle encyclopedia articles (including the article images and facts) can be freely used under Attribution-ShareAlike license, unless stated otherwise. Cite this article:
Bisto Facts for Kids. Kiddle Encyclopedia.