The black-throated green warbler (Setophaga virens) is a small songbird of the New World warbler family. 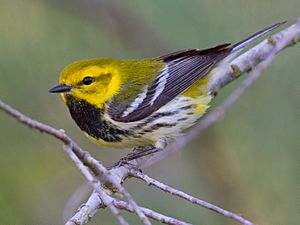 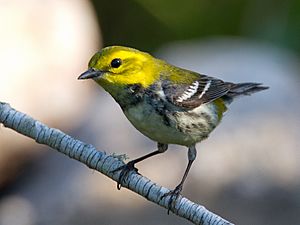 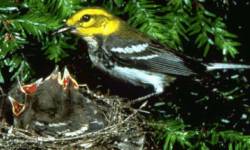 The breeding habitat of the black-throated green warbler is coniferous and mixed forests in eastern North America and western Canada and cypress swamps on the southern Atlantic coast. These birds' nests are open cups, which are usually situated close to the trunk of a tree.

These birds migrate to Mexico, Central America, the West Indies and southern Florida. One destination is to the Petenes mangroves of the Yucatán. Some birds straggle as far as South America, with the southernmost couple of records coming from Ecuador.

Black-throated green warblers forage actively in vegetation, and they sometimes hover (gleaning), or catch insects in flight (hawking). Insects are the main constituents of these birds' diets, although berries will occasionally be consumed.

The song of this bird is a buzzed zee-zee-zee-zooo-zeet or zoo-zee-zoo-zoo-zeet. The call is a sharp tsip.

This bird is vulnerable to nest parasitism by the brown-headed cowbird.

All content from Kiddle encyclopedia articles (including the article images and facts) can be freely used under Attribution-ShareAlike license, unless stated otherwise. Cite this article:
Black-throated green warbler Facts for Kids. Kiddle Encyclopedia.