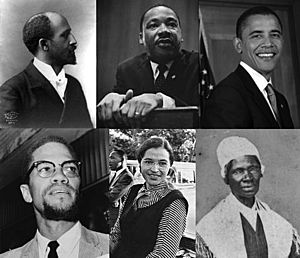 Black people is a term that is used for a racial group of people with a dark skin color. The meaning of the word is mainly used for people of Sub-Saharan African descent. A meaning that also includes certain groups in Oceania and Southeast Asia.

In India and Pakistan there are Siddi people.

In the United States the one-drop rule is sometimes used to decide whether a person is black. This is one of the reasons that black people do not all have dark skin. For example, President Barack Obama is black because he has a black father. Black people can also have light skin because of illness. Michael Jackson, another American singer, was born with brown skin but his skin became light because of a disease called vitiligo. A black person may be called white by other black people if they do not associate themselves with black culture. White people may also be called black.

All content from Kiddle encyclopedia articles (including the article images and facts) can be freely used under Attribution-ShareAlike license, unless stated otherwise. Cite this article:
Black people Facts for Kids. Kiddle Encyclopedia.