Black Mesa (also called Big Mountain) is an upland mountainous mesa of Arizona, north-trending in Navajo County, west and southeast-trending in Apache County. In Navajo it is called Dziłíjiin ('Black Mountain') and during Mexican rule of Arizona it was called Mesa de las Vacas (Spanish for 'mesa of the cows'). It derives its dark appearance from the numerous seams of coal that run through it. 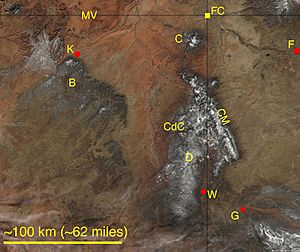 The mesa is located on the Colorado Plateau near Kayenta, Arizona, and rises to over 8168 feet. Its highest peak is located on Black Mesa's northern rim, a few miles south of the town of Kayenta. Reliable springs surfacing at several locations mean the mesa is more suitable for continuous habitation than much of the surrounding desert area. It is now split between the Hopi and Diné (Navajo) tribal reservations.

The mesa has been home to native peoples for at least 7,000 years.

Black Mesa is also the name of a small Navajo community off BIA-8066. It lies 17 miles west of Rough Rock AZ, 20 miles north of Blue Gap/Tachee, AZ, and 25 miles northeast of Pinon, AZ. In the area is a local Chapter House and a community school. 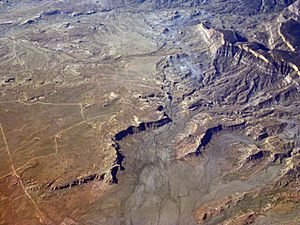 Since the 1960s the mesa has been strip mined for coal by the Peabody Western Coal Company, stirring a controversy over Peabody Energy's use of groundwater to transport coal.

All content from Kiddle encyclopedia articles (including the article images and facts) can be freely used under Attribution-ShareAlike license, unless stated otherwise. Cite this article:
Black Mesa (Apache-Navajo Counties, Arizona) Facts for Kids. Kiddle Encyclopedia.