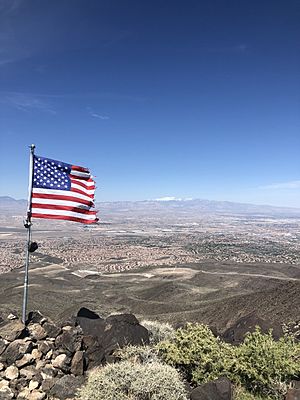 View from the summit of Black Top Mountain.

Black Mountain is a landmark mountain south of the Las Vegas Valley. It is one of the more prominent of the mountains in the McCullough Range.

Another mountain, adjacent to Interstate 515 in Henderson, is commonly called Black Mountain, including by the city of Henderson. It is actually an unnamed peak.

Black Mountain is home to the transmission towers of many of the Las Vegas area's television stations.

Hiking and Day Use

Several trails converge near Black Mountain within the Sloan Canyon National Conservation Area. These trails provide access to much of the conservation area with trail BLM 404 leading to the summit of Black Mountain.

The trail is 6.8 mile moderately trafficked out and back trail rated as strenuous due to the last half mile including class two rock scrambling. The trail is primarily used for hiking, walking, trail running, and nature trips and is best used from September until May.

All content from Kiddle encyclopedia articles (including the article images and facts) can be freely used under Attribution-ShareAlike license, unless stated otherwise. Cite this article:
Black Mountain (Nevada) Facts for Kids. Kiddle Encyclopedia.