A subsection of Bluffview is Briarwood, which is bounded by Lovers Lane on the south, Inwood Road to the east, Horseshoe Trail & Briarwood Place to the north and Elsby Avenue on the west. The neighborhood was established in the late 1930s by the Elsby family on the site of the former Bluffview Dairy. The Briarwood Crime Watch & Neighborhood Association is a volunteer-run organization primarily focused on safety and crime prevention, as well as sponsoring community activities. 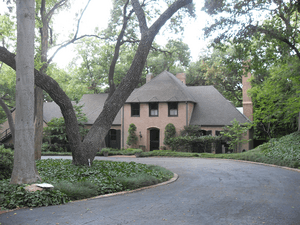 A house in Bluffview

Bluffview is so named for its relatively hilly topography—it lies along cliffs overlooking Bachman Branch and its tributaries. Some of the cliffs the neighborhood is built on rise 50 feet (15 m) over the water below.

The neighborhood was originally developed as Bluff View Estates by developer J.P. Stephenson. In 1924, he bought a 215 acres (0.9 km²) dairy farm along Bachman Branch and developed the land into 1 acre (4,046.9 m²) lots. The area was annexed by Dallas in March 1943. 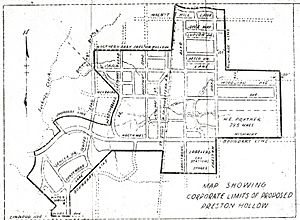 Map of Old Preston Hollow, showing a portion of Bluffview (lower left corner) within the town.

A portion of Bluffview in the northeast corner was originally planned to be within the boundaries of the town (now neighborhood) of Preston Hollow. While Bluffview was annexed by Dallas in March 1943, it was not until 1945 that Preston Hollow was annexed.

Bluffview is included in a census tract that also includes the Shorecrest and Cochran's Chapel neighborhoods.

The neighborhood is served by the Dallas Independent School District for public schools.

Children within the neighborhood are served by:

Sudie L. Williams Talented and Gifted Academy (located within the Bluffview neighborhood and formerly known as Sudie L. Williams Elementary School) serves academically talented and gifted students in grades four through six (expanding to eighth grade by 2020). Admission to Williams is based on academic achievement and an application is required.

Henry W. Longfellow Career Exploration Academy (located next door in the Greenway Parks neighborhood) serves students in grades 6-8 selected through the magnet process. The students receive the same basic middle school program offered in all Dallas Independent School District middle schools. However, special focus is placed on the exploration and development of each student's interests and abilities.

Bluff View Park is a 2.6 acre neighborhood park, established in 1945, and managed by the Dallas Parks and Recreation Department. Located adjacent to Sudie L. Williams Talented and Gifted Academy, it features benches, a drinking fountain, an outdoor basketball court, picnic tables, a playground, and a soccer field.

All content from Kiddle encyclopedia articles (including the article images and facts) can be freely used under Attribution-ShareAlike license, unless stated otherwise. Cite this article:
Bluffview, Dallas Facts for Kids. Kiddle Encyclopedia.