Bogus is a 1996 American fantasy film directed by Norman Jewison, written by Alvin Sargent, and starring Whoopi Goldberg, Gérard Depardieu, and Haley Joel Osment. It features magic tricks with magician Whit Haydn as consultant. It did poorly at the box office and Goldberg was nominated for a Razzie Award for her performance. It was filmed in Canada and New Jersey.

A fantasy, Bogus tells the story of seven-year-old Albert Franklin (Haley Joel Osment), the son of a Las Vegas magician's widowed assistant (Nancy Travis). His mother dies suddenly in a car accident and Albert, who is now an orphan, is sent to New Jersey to live with his mother's foster sister, Harriet (Whoopi Goldberg). The plot is about Albert, and his imaginary friend named Bogus (Gérard Depardieu), a French magician, who helps the boy cope with his transition. Gradually Harriet, who can also see Bogus, comes to terms with her new situation as well.

Although portrayed as Newark, NJ, part of the film was filmed in Van Vorst Park neighborhood of Downtown Jersey City. Apartment building that the character, Harriet lives is at the corner of York Street and Barrow Street is called Madison on the Van Vorst Park. 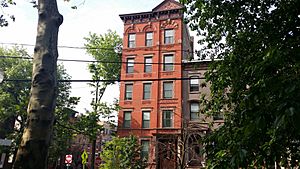 Madison on the Van Vorst Park

All content from Kiddle encyclopedia articles (including the article images and facts) can be freely used under Attribution-ShareAlike license, unless stated otherwise. Cite this article:
Bogus (film) Facts for Kids. Kiddle Encyclopedia.