Boleslaw I of Poland facts for kids 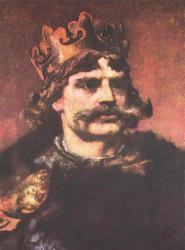 Boleslav wasn't aggressive as long as his friend - the emperor of the Holy Roman Empire lived. After his death in 1002, Boleslav started the imperial policy. During the chaos in Reich, duke conquered the border areas : Lusatia and Meissen. When finally Henry II took over the German Throne, he accepted annexiation of Lusatia, giving it to Bolslav as a fiefdom, and giving Meissen to his ally - Gunzelin. In 1003 the duke of Bohemia - Vladivoj, died. This death caused intervention in Czechia, where Boleslav put on the throne Boleslav III, that was banished before. In the same year, probably thanks to requests of the czech oposition, Boleslav (Polish one) put out the Boleslav's (Czech one) eyes and become the Duke of Bohemia himself. He wouldn't like to pay tribute to the German Emperor, like did the czech dukes, and that was an excuse, that started Polish - German War from 1003 -1018.

We know 7 children of Bolesław I. Two of them, Mieszko II Lambert and Bezprym ruled Poland after his death.

All content from Kiddle encyclopedia articles (including the article images and facts) can be freely used under Attribution-ShareAlike license, unless stated otherwise. Cite this article:
Boleslaw I of Poland Facts for Kids. Kiddle Encyclopedia.