Bondi Beach ( BON-dye) is a popular beach and the name of the surrounding suburb in Sydney, New South Wales, Australia. Bondi Beach is located 7 km (4 mi) east of the Sydney central business district, in the local government area of Waverley Council, in the Eastern Suburbs. Bondi, North Bondi and Bondi Junction are neighbouring suburbs. Bondi Beach is one of the most visited tourist sites in Australia.

In 1809 the road builder William Roberts received a grant of land in the area. In 1851 Edward Smith Hall and Francis O'Brien purchased 200 acres (0.81 km2) of the Bondi area that included most of the beach frontage, which was named the "The Bondi Estate." Hall was O'Brien's father-in-law. Between 1855 and 1877 O'Brien purchased his father-in-law's share of the land, renamed the land the "O'Brien Estate," and made the beach and the surrounding land available to the public as a picnic ground and amusement resort. As the beach became increasingly popular, O'Brien threatened to stop public beach access. However, the Municipal Council believed that the Government needed to intervene to make the beach a public reserve. On 9 June 1882, the Bondi Beach became a public beach. 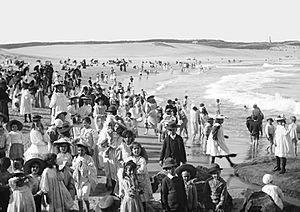 'Bondi Bay' - a photo from circa 1900 from The Powerhouse Museum

On 6 February 1938 five people drowned and over 250 people were rescued or resuscitated after a series of large waves struck the beach and pulled people back into the sea, a day that became known as "Black Sunday".

Bondi Beach was a working class suburb throughout most of the twentieth century with migrant people from New Zealand comprising the majority of the local population. Following World War II, Bondi Beach and the Eastern Suburbs became home for Jewish migrants from Poland, Russia, Hungary, Czechoslovakia and Germany. A stream of Jewish immigration continued into the 21st century and the area has a number of synagogues and a kosher butcher. The area today is very multicultural with a lot of new wealthy Asian families and Samoans. The multicultural migration funded and drove the growth of the suburb throughout the 90's into the turn of the century, moving it steadily from its working class roots towards upper/middle class enclave similar to its neighbors of Rose Bay and Bellevue Hill which was listed as the most expensive postcode in the country in 2003, 2004, 2005.

Bondi Beach was long a centre for efforts to fight indecency in beach attire. The beach was a focal point of the 1907 Sydney bathing costume protests, organized to oppose proposed dress standards for beachgoers. The Local Government Act, Ordinance No. 52 (1935) governed the decency of swimming costumes and was in force between 1935 and 1961, and resulted in public controversy as the two-piece "bikini" became popular after World War II. Waverley Council's beach inspectors, including the legendary Aub Laidlaw, were responsible for enforcing the law and were required to measure the dimensions of swimwear and order offenders against public decency off the beach. While vacationing in Australia during 1951, American movie actress Jean Parker made international headlines when she was escorted off the beach after Laidlaw determined her bikini was too skimpy. The rule became increasingly anachronistic during the 1950s and was replaced in 1961 with one requiring bathers be "clad in a proper and adequate bathing costume", allowing for more subjective judgement of decency. By the 1980s topless bathing had become common at Bondi Beach, especially at the southern end.

Sydney's Water Board maintained an untreated sewage outlet not far from the north end of the beach which was closed in the mid-1990s when a deep water ocean outfall was completed.

Bondi Beach is about 1 kilometre (0.62 mi) long and receives many visitors throughout the year. Surf Life Saving Australia has given different hazard ratings to Bondi Beach in 2004. While the northern end has been rated a gentle 4 (with 10 as the most hazardous), the southern side is rated as a 7 due to a famous rip current known as the "Backpackers' Rip" because of its proximity to the bus stop, the fact that many backpackers and tourists do not realise that the flat, smooth water is a rip, and quite dangerous, and the unwillingness of tourists to walk the length of the beach to safer swimming. The south end of the beach is generally reserved for surfboard riding. Yellow and red flags define safe swimming areas, and visitors are advised to swim between them.

There is an underwater shark net however it does not stretch the entire beach, it is made up of overlapping sections. Many other beaches along the same stretch of the coast have similar shark nets. Pods of whales and dolphins have been sighted in the bay during the months of migration (March–May, September–November). Fairy penguins, while uncommon, are sometimes also seen swimming close to shore or amongst surfers in southern line-up.

In 2007 the Guinness World Record for the largest swimsuit photo shoot was set at Bondi Beach, with 1,010 women wearing bikinis taking part.

Bondi Beach was added to the Australian National Heritage List in 2008.

In 2011 Waverley Council implemented Wi-Fi to Bondi Beach users. Service is free with limits on access periods and downloads per use. Cost of setup was estimated to be between $34 000 to $50 000 with annual costs of $25 000. Local business as well of The Bondi Chamber of Commerce supported the notion as locals and visitors are able to connect with local business, events and other community and council events. In 2012 Mayer of Waverley Sally Betts said that the 2 million visitors annually, Wi-Fi offers access to local events and business information. Safety information and a guide to enjoying the beach for bathers and surfers is available on www.mybondisummer.com.

Bondi Beach is represented in one of the most popular sporting competitions across Australia, the National Rugby League competition, by the local team the Sydney Roosters, officially the Eastern Suburbs District Rugby League Football Club (ESDRLFC).

Bondi Beach is the end point of the City to Surf Fun Run which is held each year in August. The race attracts over 63,000 entrants who complete the 14 km run from the central business district of Sydney to Bondi Beach. Other annual activities at Bondi Beach include Flickerfest, Australia's premier international short film festival in January, World Environment Day in June, and Sculpture by the Sea in November. In addition to many activities, the Bondi Beach Markets is open every Sunday, and a food market every Saturday, at Bondi Beach Public School. Many Irish and British tourists spend Christmas Day at the beach.

An Oceanway connects Bondi to South Head to the north and other beaches to the south up to Coogee.

Bondi Beach hosted the beach volleyball competition at the 2000 Summer Olympics. A temporary 10,000-seat stadium, a much smaller stadium, 2 warm-up courts, and 3 training courts were set up to host the tournament. 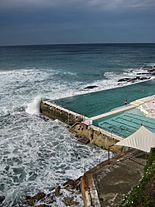 Bondi Baths, the swimming pool managed by the Icebergs

Bondi Surf Bathers' Life Saving Club claims to be the world's first surf lifesaving club, and North Bondi Surf Life Saving Club is a federation club. Both clubs were founded in 1907. Bondi members invented the surf reel and many other icons of lifesaving. Surf lifesavers from both clubs were involved in the largest rescue ever on a single day, known as 'Black Sunday'. Bondi holds the most Australian Surf Lifesaving Championship gold medals in R&R (rescue & resuscitation) and North Bondi holds the most gold medals in March Past.

The Bondi Icebergs Swimming Club origin dates back to 1929 and owes its origins to the desire of a band of dedicated local lifesavers who wished to maintain their fitness during the winter months. They formed the Bondi Icebergs Winter Swimming Club and drew up a constitution and elected office bearers. Included in the constitution was a rule that to maintain membership it was mandatory that swimmers compete on three Sundays out of four for a period of five years.

The Bondi Skate Park opened to the public in 1991 with only two skate ramps. In 2004, the council sought consultation with the skating community for input on how best to upgrade the site. The end result was the construction of a 12 foot deep with a 5-foot shallow bowl, rated 4 out of 5 stars by Skateboard Australia. The bowl was designed by Chad Ford and built by Zalem Pty. Ltd. The park has been hosting BOWL-A-RAMA a skating competition since 2004;. BOWL-A-RAMA attracts competitors and spectators nationally with Tony Hawk defending his title at its 2015 event along with other notable skaters Steve Caballero and current world Champion Pedro Barros.

Numerous festivals and events such as the annual Miss Bondi beauty pageant have made Bondi Beach a popular destination among travellers. The beach has long captured the attention of poets including Joanne Burns, Les Murray and Brook Emery. The Vans Bowl-A-Rama skateboarding competition is held at the skate bowl in February every year.

2010 Amnesty International Australia organised a gathering to support refugees and asylum seekers and urging the Australian Government to resume processing Afgan and Sri Lankan asylum seekers. They claim the cessation of processing is inconsistent with the 1951 UN Refugee Convention. Supporters created a human ring on the beach.

In 2010, the Swedish furniture store IKEA celebrated the thirtieth anniversary of its BILLY bookcase by setting up thirty bookcases stocked with books on Bondi Beach. It was a one-day event where beachgoers could take, swap, or donate books. 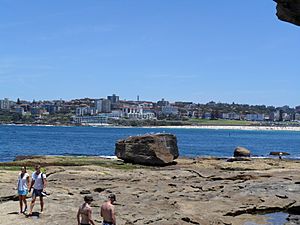 Bondi Beach has been used as a location for numerous films, television series, music videos, and a video game:

An article in the Sydney Morning Herald, 6 December 1997, noted the increasing gentrification of the area. Nonetheless it remains a diverse community. Bondi Beach is often considered to be one of Sydney's most densely populated suburbs, with a population density of 10188/km² in 2011.

All content from Kiddle encyclopedia articles (including the article images and facts) can be freely used under Attribution-ShareAlike license, unless stated otherwise. Cite this article:
Bondi Beach Facts for Kids. Kiddle Encyclopedia.