Borders of Palestine facts for kids 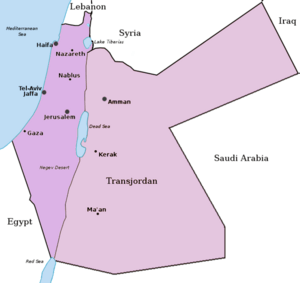 Map of the state of Palestine

Palestine's international borders are the borders of the Palestinian territories. It borders Lebanon in the north, Syria in the northeast, Jordan which was part of the territory until 1948, that borders Saudi Arabia and Iraq in the east and it also borders Egypt on the southwest, which shares the maritime boundary of the Red Sea.

All content from Kiddle encyclopedia articles (including the article images and facts) can be freely used under Attribution-ShareAlike license, unless stated otherwise. Cite this article:
Borders of Palestine Facts for Kids. Kiddle Encyclopedia.