Borough of Swale facts for kids 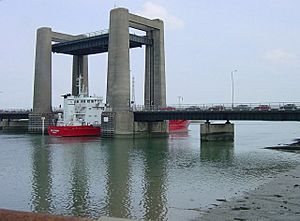 Swale is a local government district with borough status in Kent, England and is bounded by Medway to the west, Canterbury to the east, Ashford to the south and Maidstone to the south west. Its council is based in Sittingbourne. The district is named after the narrow channel called The Swale, that separates the mainland of Kent from the Isle of Sheppey, and which occupies the central part of the district.

The district was formed in 1974 under the Local Government Act 1972, from the Borough of Faversham; the Borough of Queenborough-in-Sheppey, which covered the whole of Sheppey; the Sittingbourne and Milton Urban District; and Swale Rural District.

Most of the southern half of the Borough lies within the Kent Downs Area of Outstanding Natural Beauty, whilst Sittingbourne and the Isle of Sheppey forms the concluding part of the Thames Gateway growth area.

There are four towns in the borough: Sittingbourne and Faversham on the mainland, and Sheerness and Queenborough on Sheppey.

Swale is a mainly rural borough, containing a high proportion of the UK's apple, pear, cherry and plum orchards (the North Kent Fruit Belt), as well as many of its remaining hop gardens.

Sheerness is a busy port and previously produced steel. Sittingbourne has a variety of smaller industrial sites.

The Roman Watling Street passed through the area, as witness the straightness of the A2 main road, now by-passed by the M2 motorway.

There are two railway lines in Swale: the Chatham Main Line and the Sheerness Line, which meet at Sittingbourne.

All content from Kiddle encyclopedia articles (including the article images and facts) can be freely used under Attribution-ShareAlike license, unless stated otherwise. Cite this article:
Borough of Swale Facts for Kids. Kiddle Encyclopedia.