Kids Encyclopedia Facts
Not to be confused with Queensborough.

Queenborough is a small town on the Isle of Sheppey in the Swale borough of Kent in South East England.

Queenborough is two miles (3.2 km) south of Sheerness. It grew as a port near the Thames Estuary at the westward entrance to the Swale where it joins the River Medway. It is in the Sittingbourne and Sheppey parliamentary constituency.

Queenborough Harbour offers moorings between the Thames and Medway. It is possible to land at Queenborough on any tide and there are boat builders and chandlers in the marina. Admiral Lord Nelson, is reputed to have learned many of his seafaring skills in these waters, and also shared a house near the small harbour with his mistress, Lady Hamilton.

Queenborough today still reflects something of its original 18th-century seafaring history, from which period most of its more prominent buildings survive. The church is the sole surviving feature from the medieval period. The town was first represented by two members of parliament in 1572.

In Saxon times, the settlement on the site was known as Cyningburh, "King's Borough".

A fortress, called Sheppey or Queenborough Castle, was built to guard the passage of ships along the Swale upon the command of King Edward III between 1361–1377, during the Hundred Years' War with France. It was built on the site of a much earlier, but smaller castle. Its unusual design – a round and symmetrical – was described by historians Howard Colvin and R. Allen Brown as "exemplif[ying] the principles of cylindrical and concentric fortification carried to their logical conclusion with perfect symmetry". They also suggest that the design, which bore similarities to Henry VIII's Device Forts of the 16th century, may have been designed to defend against and to make best use of gunpowder artillery. Queenborough was the only true concentric castle built in England. It regained importance in the 16th century under Thomas Cheney, when it is thought to have influenced the construction of nearby Deal Castle and Walmer Castle.

In those days north Kent was divided by open waters and marshes stretching inland. The safest navigation to the open sea was then the route from the Thames into the Yantlet Creek (separating the Isle of Grain from the rest of Hoo Peninsula), and thus into the Swale from the Medway estuary, around the leeward side of the Isle of Sheppey into the Wantsum Channel, navigating past the Isle of Thanet to Sandwich and only then into the open waters of the English Channel. It was thus an easily defensible planned-town centre for the wool trade.

King Edward III had the town renamed after his Queen, Philippa of Hainault, and conferred upon it the rights of a free borough, with a governing body of a mayor and two bailiffs. He granted Queenborough a charter in 1366 and two years later bestowed the duties of a royal borough upon it.

During this period, Queenborough, on the Isle of Sheppey was an important town for the export of wool, a significant crown revenue. From 1368: "By Royal decree, the Wool Staple was transferred from Canterbury to Queenborough, which, together with Sandwich, became one of the only two places in Kent through which all the exported wool was compulsorily directed."

The castle was excavated in 2005 by Channel 4's archaeology television programme Time Team.

King Charles I had the town re-incorporated under the title of the "mayor, jurats, bailiffs and burgesses of Queenborough", during which time the population was chiefly employed in the local oyster fishery. However the fort having protected the Swale and Medway estuaries for 300 years was never in fact to realise its function as a garrison, and recorded no active military history. After being seized by Parliamentarians in 1650, and being considered unsuitable for repair, being of "no practical use" it was demolished during the interregnum.

Main page: Raid on the Medway

Not long after this, in 1667, the Dutch captured the new Sheerness fort (then under construction) and invaded Queenborough. The occupation lasted only a few days; though the Dutch caused widespread panic, they were unable to maintain their offensive, and withdrew having captured the Royal Charles and burnt numerous other ships in the Thames and Medway. Following this raid on the Medway much-needed attention was given to the improvement of the naval defences of the Medway, which at length helped strengthen the economy of Queenborough and Sheppey. Some 300 years later in 1967, The Queenborough and Brielle (the Netherlands) twinning project was established. 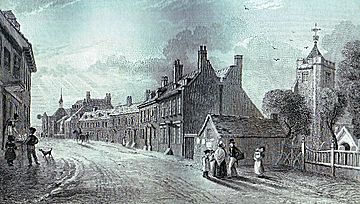 The parish church was overhauled during 1690 to 1730, and a number of houses added to the growing town during the 18th century. With the general prosperity of the colonial and mercantile trades of the age, Queenborough thrived. However early in the 19th century, change was again visited upon the ancient settlement. "Queenborough in the 1850s was a very sorry place indeed; broken down and almost lawless."

With the silting up of the Yantlet creek and the Wantsum channel and improved navigation through the Thames estuary to London, Queenborough began to lose its importance, becoming something of a backwater. Daniel Defoe described it as "a miserable and dirty fishing town (with) the chief traders ... alehouse keepers and oyster catchers".

The Royal Navy eventually became less prominent on the River Medway as other dockyards developed and ships grew in size, so that they were largely replaced by prison hulks which would frequently dispose of their dead charges on a salt marsh at the mouth of The Swale, which was subsequently to become known as Dead Man's Island, and can still be found as such, on local maps today. The new fort and harbour developments completed at Sheerness by this time further replaced Queenborough by being better positioned at the mouth of the Medway.

It is all the same worth noting as evident from records between 1815–20 that the Corporation of Queenborough was in some financial difficulties, owing some £14,500 that it could not hope to pay. It appears that the mayor and other officials had been less than honest in their duties toward the community, with the use of the public money at their disposal. This fraud caused a great financial burden upon the fisherman and oystermen, who were driven to "unlawful and riotous assembly", in protest against unwarranted charges made upon them in the course of their trade.

So serious had this deterioration in conditions become, that by the middle of the 19th century the corporation was bankrupt, and parliament was called upon to act, vesting by an Act of Parliament much of the town's business in the hands of trustees who were able to refinance the economy by selling land, property and the ancient oyster fishery. The oyster trade having been corrupted by smuggling and the bribery of the island's members of parliament, it lost its franchise in the Reform Act of 1832.

Unsightly modern sea wall defences have hindered the character of the beaches but were deemed necessary; a large yachting harbour exists, where the pirate radio ship Radio Caroline (in the river Medway 2003-4) anchored for a while. Tourism is today a major feature of the island, with Queenborough enjoying some of the fruits of local investment.

Matthias Falconer of Brabant established the first copperas factory in England at Queenborough in 1579.

The economy of Queenborough was boosted significantly by the establishment of a branch line from Sittingbourne by the South-Eastern & Chatham Railway which operated in conjunction with a mail and passenger service by steamer to Flushing in the Netherlands. The Swale was bridged when the railway was built in 1860.

From the town's depression in the 1850s there began a process of recovery. New industries came to Queenborough including a glass works and a company engaged in coal washing. Besides these many other small industries developed, including potteries, the Sheppy Fertilizer company (which used the old spelling of Sheppey) and the glue works. The Portland cement works opened in 1890, and there is still a considerable trade in timber.

The ethnicity of the Queenborough and Halfway electoral ward, which includes the neighbouring villages of Minster-on-Sea, Rushenden and Halfway Houses, was 98.6% white, 0.7% mixed race, 0.3% black, 0.2% non-Chinese Asian and 0.3% Chinese or other.

7% of Queenborough and Halfway residents aged 16–74 had a Bachelor's degree or higher, compared to 20% nationally.

Trains pass through Queenborough railway station on the Sheerness Line between Sittingbourne, where the line links with the rest of the network, and Sheerness.

The harbour and creek at Queenborough on the Isle of Sheppey has mooring facilities for a range of boats. There is an All Tide Landing, owned by Queenborough Yacht Club situated on Crundells Wharf, which can be used by mooring holders and visiting yachtsmen.

All content from Kiddle encyclopedia articles (including the article images and facts) can be freely used under Attribution-ShareAlike license, unless stated otherwise. Cite this article:
Queenborough Facts for Kids. Kiddle Encyclopedia.