Sittingbourne is an industrial town situated in the Swale district of Kent in south east England, 17 miles (27 km) from Canterbury and 45 miles (72 km) from London. The town sits beside the Roman Watling Street, an ancient British trackway used by the Romans and the Anglo-Saxons and next to the Swale, a strip of sea separating mainland Kent from the Isle of Sheppey. The town became prominent after the death of Thomas Becket in 1170, since it provided a convenient resting point on the road from London to Canterbury and Dover.

Sittingbourne is growing rapidly due to a number of large residential developments, and its railway line links to London Victoria and HS1 to St Pancras International, the journey taking about an hour from Sittingbourne railway station.

Sittingbourne owes its name to a modernised version of an observation on its location. The town's name came from the fact that there is a small stream or "bourne" running underground in part of the town. Hasted writing in the 1790s in his History of Kent states that: 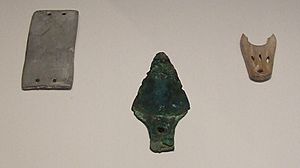 There is evidence of settlement in the area before 2000 BC, with farming and trading Celtic tribes living inland to avoid attack, yet close enough to access the sea at Milton Creek. In AD 43 the Romans invaded Kent, and to make access quicker between London and Dover, built Watling Street, which passed straight through Sittingbourne. As a point where sea access met road access, the port of Milton Regis became the Roman administrative centre for the area, with some 20 villas so far discovered, but Sittingbourne remained a minor hamlet throughout Roman times. Most Roman finds in this area were due to the efforts of 19th century brick makers who used topsoil to make bricks, and uncovered the finds; and preserved thanks to banker George Payne, who preserved or bought materials and published his works in 1893 in Collectanea Cantiana. 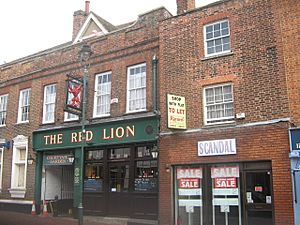 There was no entry for Sittingbourne in the Domesday book of 1086, merely a note attached to Milton Regis showing a population of 393 households. However, after the murder of the Archbishop of Canterbury, Thomas Becket in 1170, pilgrims began to travel to Canterbury Cathedral and Sittingbourne became a useful hostelry for travellers. Sittingbourne is mentioned as a stopping point in The Canterbury Tales, with the Summoner in the Wife of Bath's Prologue says:

At this time, the 13th century Parish church of St Michael was constructed, and the High Street contained 13 pubs and hostels. The Lyon - now the Red Lion - played host to King Henry V of England on his way back from the Battle of Agincourt, and Henry VIII visited Sittingbourne in 1522 and 1532. In 1708 the Rose Inn was built, originally called Rose Place and used as a private house. According to Edward Hasted "the principal inn now in it (Sittingbourne), called the Rose, is perhaps the most superb of any throughout the kingdom." In 1825 the future Queen Victoria and her mother, Princess Victoria of Saxe-Coburg-Saalfeld stayed overnight at the Rose Inn.

After the railway came in 1858, Sittingbourne became less a market trading and hostelry stop-off, and more a 19th-century centre of production to fuel the expansion of London, by producing bricks and paper from its clay substrata.

The area around Sittingbourne was subject to constant air raids by Zeppelins and aeroplanes during the First World War. The Germans used the town as a reference point for bearings on the way to London.

The first visit by a German aeroplane happened on Christmas Day 1914. Guns at Sheerness fired at the lone invader but still one shell dropped into a field at Iwade. The next event was to occur on 16 January 1915 when another solitary pilot from a German aerodrome in Belgium bombed Sittingbourne. This aircraft, a Taube, was pursued by two local airmen, but managed to escape after dropping a couple of bombs.

About 100 air raid warnings were sounded in Sittingbourne during the First World War and anti-aircraft batteries were strengthened in 1917. The last big raid to pass over the town on Whit Sunday (19 May 1918), carried out by a number of Gothas, eliciting perhaps the most ferocious barrage from the ground defences the town had ever seen.

The second Gotha was surrounded by British fighters shortly after, returning from a successful raid on London.

Donald John Dean VC OBE of Sittingbourne was awarded the Victoria Cross for deeds carried out in France in 1918. His ashes are interred in the family plot at St John the Baptist Church, Tunstall, Kent.

As a result of the number of soldiers blinded during the war, the Kent Association for the Blind was formed in Sittingbourne in 1920.

Sittingbourne and its consumed suburb of Milton today is a growing town, with much recent expansion by way of house-building in the former chalk and brick clay works digs. Expansion is attributable to the towns train line links to London, some 60 minutes away by high speed rail and easy access to the A2, A249, M2 and M20. (see Transport)

Paper manufacture at Kemsley Paper Mill is the area's largest employer. Much of the surrounding Kentish countryside is good farming land, and being southerly in the UK many varieties of fruit are grown nearby, with this part of Kent being particularly famous for apples and cherries. Fruit preserving and packing are hence large employers, while new industrial and retail parks provide additional employment and services. 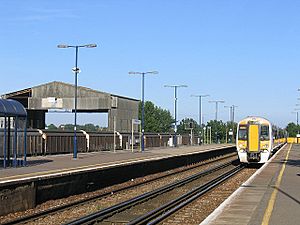 Transport has always played a large part of Sittingbourne's history, geographically located midway between the major port of Dover and the important capital of London was the reason for an enlarged settlement at Sittingbourne.

Roads came early to Sittingbourne, with the Roman construction of Watling Street. The equally straight A2 main road and M2 motorway now follow a similar route, and provide access to the town. The A249 passes the town on the west, heading between Maidstone and Sheerness.

In 2011 Sittingbourne Northern Relief road, linking Kemsley with the Eurolink Business Estate and East Hall Farm residential development (on the north-east of the town), was opened. Bus services are provided mainly by Arriva Southern Counties.

From 1858, after the agreement to connect Strood to Canterbury via the East Kent Railway of the London, Chatham and Dover Railway, Sittingbourne has had a railway station. Today the three platform station is served by both the Chatham Main Line and the Sheerness Line, and is located 44 miles 1260 yards from London Victoria according to the mileage sign on the footbridge. Train services are provided by Southeastern.

Since 2010, Southeastern have opened up a service from Faversham involving the HS1 line, this service runs from Faversham to London St Pancras. It also links with the Eurostar service (to France) from Ebbsfleet International. 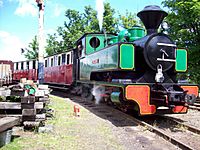 The preserved former paper mill railway the Sittingbourne and Kemsley Light Railway still exists today. In 1965 it was decided that the railway was uneconomic, with the significant progress made in the use of the car, and so lorries were more commonly used for transporting produce. Consequently, by 1969 the Bowater Light Railway, much loved as it was by the firm (and with assistance of Capt Peter Manisty) was handed over to the Locomotive Club of Great Britain to be preserved and operated as the Sittingbourne and Kemsley Light Railway. It has since become a significant feature in the town's tourist industry, and provides the only method of transport to the annual Sittingbourne Beer Festival. However, it has been under threat of closure since 2008 when M-real sold the site to a property developer.

All content from Kiddle encyclopedia articles (including the article images and facts) can be freely used under Attribution-ShareAlike license, unless stated otherwise. Cite this article:
Sittingbourne Facts for Kids. Kiddle Encyclopedia.