Kids Encyclopedia Facts
Not to be confused with Rainham, London.

Rainham is a town in the unitary authority of Medway, in South East England. It is part of the ceremonial county of Kent. Historically, Rainham was a separate village until, in 1928, it was added to the Municipal Borough of Gillingham, which was originally created in 1903 and was grouped into the latter's built-up area in analysis of the 2011 census by the Office for National Statistics. It became part of the Medway authority when Gillingham was incorporated with the other towns to form Medway Unitary Authority in 1998. It has its own leisure and retail hub and unlike Gillingham has a traditional area broadly to the south and which since the late 20th century is largely residential housing.

Rainham is located on the dip slope of the North Downs where it descends to the River Medway; its maximum height is about 125m above sea level. There are three roads crossing the town. The M2 motorway runs along its southern edge, two miles (6 km) from the town centre. The main road through the town, the A2, follows the ancient Watling Street, the Roman road between London and Canterbury. The most northerly road runs close to the southern bank of the river. The Chatham Main Line has a railway station here and National Cycle Route 1 runs through the town. London is approximately 39 miles (62.4 km) to the west.

Parkwood estate, in the south of Rainham, was built mainly during the 1960s and 70s. Building this estate required the destruction of one of the last large areas of relict woodland in North Kent. The area towards Gillingham is known as Rainham Mark, named after an old ecclesiastical boundary: and Macklands is an older part of the town to the north. The Macklands Arms public house was named after Macklands Manor House. The manor house was home to members of the Mackay family, who owned a printing company in Chatham. Lower Rainham, once a separate village, is now also a part of the town. 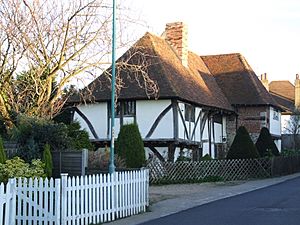 Rainham was originally a linear settlement along the main road. The population in 1801 was 422; two centuries later it is well over six thousand. Part of the reason for this huge growth can be attributed to the railway. When the railway came in 1858 it brought an almost immediate increase in the size of the village; when the Chatham Main Line was electrified in 1959, as with all the places served by it, town growth began again. One of the results was the building of Parkwood estate (see above). 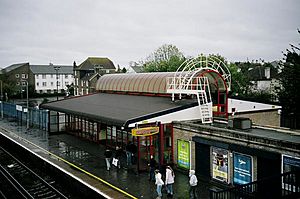 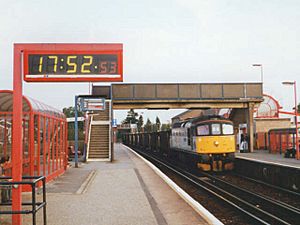 The parish church is dedicated to St Margaret; the Roman Catholic church to St Thomas of Canterbury.

The present Parish of Rainham is a very large one and has over 30,000 people living within its boundary.

There was a village here by 811 AD when a charter records a grant of land at ‘Roegingaham’ to Wulfred, Archbishop of Canterbury. In 1137 Robert de Crevecoeur gave Rainham Church and 18 acres of land to Leeds Priory, which he had founded. This meant that the abbot was also the rector of Rainham and would have appointed the vicar as the abbey’s representative to act as the parish priest. After Leeds Priory was dissolved by Henry VIII, vicars were appointed by the Archbishop of Canterbury, who became Patron of the Parish. The names of most of the vicars since 1282 are listed on a display inside the church. The Parish was transferred from Canterbury to the Diocese of Rochester in 1938, when the Patron then became the Bishop of Rochester. The present church building is almost entirely of Gothic design, with just a few remains of the Norman church still incorporated in the east wall of the chancel. The 13th century Early English style can be seen in the chancel, the 14th century period, known as the Decorated, represented in the nave and aisle, with the latest period of Gothic architecture, the Perpendicular most obvious in the 15th century tower.

The church itself is built of Kentish ragstone and flint. The church underwent major restoration in the 1860s and 1870s, and there have been several further important periods of reconstruction in the 20th and again in this century, when it was discovered that the main roof and tower were in an advanced state of decay, and required a comprehensive programme of works to ensure the long term safety and integrity of the building. The repairs were initially estimated to cost up to £1million, but were completed in April 2010 for less than £1/2 million.

The tower is a major local landmark and was built about 1480. It stands 30m (100ft) high with an octagonal stair turret probably housing a beacon at the top to act as one of a chain between coast and capital. The tower houses a peel of eight bells (read more on the page about the bell ringers) 14th century nave, is very plain and almost all the roof timbers are original. Most of the window stonework was replaced in the 19th century. The stained glass of the south-east window is by Hardman [1871 ]. The most interesting feature in the nave is the celure which is unique and once formed a canopy for a rood screen. It was painted in the 1460s on the orders of Sir Thomas St Leger, who married Edward IV’s sister, Anne, and depicted the King’s badge of the Sun in Splendour. This was changed rapidly after the demise of the House of York, following the Wars of the Roses, with the rose of Lancaster. The mediaeval wall paintings and consecration crosses were uncovered in the 1920s following a chance discovery by workmen of a cross beneath the surface of the south wall. The consecration crosses date from the reconstruction of the nave in the 14th century. In the chancel are the earliest remaining parts of the building in the form of 13th century wall arcading. There are three sedilia and nearby is a 13th-century piscina. By comparison you will also see the newest addition to the chancel, the Millennium Cross, made out of branches of our 1000-year-old yew tree, which can still be seen in the churchyard. Between the chancel and chapel is the arcade, with the two arches nearest the nave dating from the 13th century. The parclose screen inserted into the arcade is a very fine example of 15th century woodwork.. The chapel also houses a particularly fine 14th century oak chest.

Rainham has a small shopping area, including the Rainham Shopping Centre precinct, with a few major shops. These include a Tesco Metro, Iceland, Boots and Wilkinsons. There is now also a Costa Coffee store located just outside the shopping centre, facing out on to the main A2 road. It replaced a furniture store that used to be there called Gerald Lukehurst. There is a record store called MagicDiscs as well as some other various charity shops including Demelza House. The precinct has two different Lloyds Pharmacy chemists, and there are various dining places including a cafe called Bunkers. Other stores include Blockbuster (Now Closed) and two Sense charity shops (A furniture store and a smaller store). Rainham shopping centre also has other essential places of interest, such as: Chip shops, cafes, restaurants and some pubs including Mackland Arms and the Angel on the side of Station Road. When the centre first opened, there was a major branch of Lavells Newsagents. This became a branch of Bart in the late 80s and it now currently trades as Iceland Frozen Foods. There is a smaller shopping precinct in Parkwood. There once used to be a bakery named 'Goldings Bakery' within the centre, but it has closed down since early 2012.

Parkwood shopping centre has a few shops including The Co-operative Food, Martin's the Newsagent, a chip shop, a pharmacy, a veterinary and a wine store. The town also has a library as well as several parks and a public swimming pool. This swimming pool is called Splashes and is near Cozenton Park and Rainham Mark Grammar School.

Rainham is also home to the first ever oast house theatre, where the Rainham Theatrical Society (RaTS) puts on regular performances. 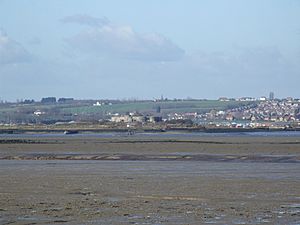 Looking across the Medway from Horrid Hill, Riverside Country Park.

The Riverside Country Park, which fronts on to the river Medway at Rainham Creek, includes the promontory of Horrid Hill. Berengrave Local Nature Reserve is located on the Lower Rainham Road.

There are also a number of parks and recreational grounds around Rainham.

All content from Kiddle encyclopedia articles (including the article images and facts) can be freely used under Attribution-ShareAlike license, unless stated otherwise. Cite this article:
Rainham, Kent Facts for Kids. Kiddle Encyclopedia.