Boston Harbor is an unincorporated community in Thurston County, Washington. C. D. Hillman, a Seattle real estate developer, platted the site in 1917 believing that it would be excellent for industrial development and easily reached by the mosquito fleet of steamships plying the Puget Sound. The community is home to the Dofflemyer Point Light, built in 1934 and listed on the National Register of Historic Places in 1995.

It is located at the intersection of Pickering Passage and Dana Passage, with outlying parts also falling along Budd Inlet. It is located between Dover Point and Defflemyer Point, which is marked by a distinctive concrete lighthouse that is not accessible by land. Boston Harbor is a formerly rural area that has now become an affluent exurb of Olympia, Washington. 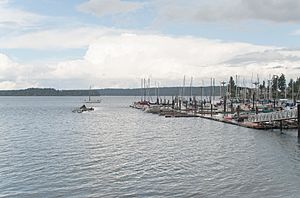 Looking out on Boston Harbor Marina

The community features many waterfront and waterview homes. The area is also home to the Boston Harbor Marina, and sits near Priest Point Park and Burfoot Park. Children in the area have attended the formerly independent Boston Harbor School since the early 1900s, now part of the Olympia School District.

All content from Kiddle encyclopedia articles (including the article images and facts) can be freely used under Attribution-ShareAlike license, unless stated otherwise. Cite this article:
Boston Harbor, Washington Facts for Kids. Kiddle Encyclopedia.