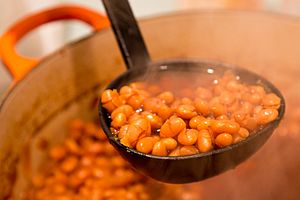 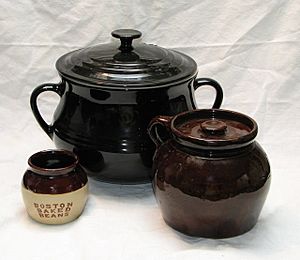 An assortment of crockery in which beans are baked, including a souvenir-style Boston Baked Beans beanpot

Boston baked beans are a variety of baked beans, sweetened with molasses, and flavored with salt pork or bacon.

Native Americans had made corn bread and baked beans. The Pilgrims at Plymouth Colony learned these recipes in the early 1620s and likely added barley to the corn meal to invent New England brown bread. The triangular trade of slaves in the 18th century helped to make Boston an exporter of rum, which is produced by the distillation of fermented molasses. At that time, molasses was added to local baked bean recipes, creating Boston baked beans. In colonial New England, baked beans were traditionally cooked on Saturdays and left in brick ovens overnight. On Sundays, the beans were still hot, allowing people to indulge in a hot meal and still comply with Sabbath restrictions. Brown bread and baked beans along with frankfurters continue to be a popular Saturday night staple throughout the region.

Boston is often referred to as “Beantown” in reference to the popular dish. From 1883 to 1906 the National League baseball team in Boston was known as the Boston Beaneaters.

All content from Kiddle encyclopedia articles (including the article images and facts) can be freely used under Attribution-ShareAlike license, unless stated otherwise. Cite this article:
Boston baked beans Facts for Kids. Kiddle Encyclopedia.