Sabbath in Christianity facts for kids 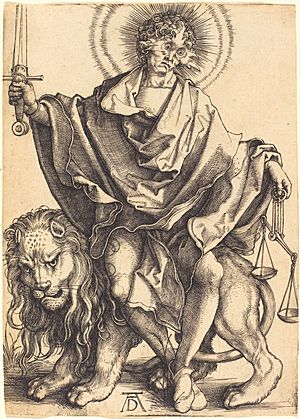 Sol Iustitiae (Sun of Righteousness), derived from the Jewish Bible, Malachi 4:2. By Albrecht Dürer, circa 1499/1500
This page is about the Christian day of rest. For the Jewish day of rest, see Shabbat.

Most Christians honor the Sabbath on Sunday to remember the Resurrection of Jesus on the first day of the week on the Jewish calendar. They say that there is an analogy between the obligation of the Christian day of worship and the Sabbath-day ordinance. These two rules are not literally identical though. They say that this ordinance is no longer valid, because God has replaced his old creation by a new one. For this reason, the obligation to keep the Sabbath is not the same for Christians as for Jews. They say there are examples in the New Testament, and in other writings surviving from the first few centuries.

Some conservative Christians are "Sabbatarians". Most of these follow the Reformed traditions. Sabbatarians think the first day of the week or Lord's Day is the new Sabbath. This is because the 4th commandment has never been revoked and Sabbath-keeping is in any case a creation ordinance.

Still others believe that the Sabbath remains as a day of rest on the Saturday, reserving Sunday as a day of worship. In reference to Acts 20:7, the disciples came together on the first day of the week (Sunday) to break bread and to hear the preaching of the apostle Paul. This is not the first time Christians assembled together on a Sunday; Jesus appeared to the Christians on the "first day of the week" while they were in hiding. One can maintain this argument in that Jesus himself maintained the Sabbath, although not within the restrictions that were mandated by Jewish traditions; the Pharisees often tried Jesus by asking him if certain tasks were acceptable according to the Law. This would seem to show that while the Sabbath was still of importance to the Jews, Sunday was a separate day for worship and teaching from Scriptures.

The Seventh-day Adventists and other churches disagree with some of these views. They argue that the custom of meeting for worship on Sunday originated in paganism, specifically Sol Invictus and Mithraism (in which sun god worship took place on Sunday)

Jews had come to be hated in the Roman Empire after the Jewish-Roman wars. This led to the criminalization of the Jewish Sabbath. Hatred of Jews is apparent in the Council of Laodicea (4th Century AD) where Canon 37–38 states: "It is not lawful to receive portions sent from the feasts of Jews or heretics, nor to feast together with them." and "It is not lawful to receive unleavened bread from the Jews, nor to be partakers of their impiety." [1] In keeping with this rejection of the Jews, this Roman council also criminalized the Jewish Sabbath as can be seen in Canon 29 of the Council Laodicea: "Christians must not Judaize by resting on the Sabbath, but must work on that day, rather honoring the Lord's Day; and, if they can, resting then as Christians. But if any shall be found to be judaizers, let them be excommunicated from Christ."

In the Gospel of Mark 2:28 Jesus says 'the Son of Man is lord even of the sabbath'.

All content from Kiddle encyclopedia articles (including the article images and facts) can be freely used under Attribution-ShareAlike license, unless stated otherwise. Cite this article:
Sabbath in Christianity Facts for Kids. Kiddle Encyclopedia.