The Bounty Islands are a small group of 13 uninhabited granite islets and numerous rocks, with a combined area of 135 ha (330 acres), in the South Pacific Ocean. Territorially part of New Zealand, they lie about 670 km (416 mi) east-south-east of New Zealand's South Island, 530 km (329 mi) south-west of the Chatham Islands, and 215 km (134 mi) north of the Antipodes Islands. The group is a World Heritage Site.

The islands are listed with the New Zealand Outlying Islands. The islands are an immediate part of New Zealand, but not part of any region or district, but instead Area Outside Territorial Authority, like all the other outlying islands except the Solander Islands.

Captain William Bligh discovered the Bounty Islands en route from Spithead to Tahiti in 1788, and named them after his ship HMS Bounty, just months before the famous mutiny. The location of the islands were only roughly marked on charts. In early 1866 Commander W. H. Norman of HMVS Victoria (1855) was tasked with determining more accurately their position. He reported them as being latitude 47ˈ50 South and longitude 179ˈ00 East. Captain George Palmer, during the search for the Matoaka placed the islands at 47ˈ46ˈ24 South 178ˈ56ˈ45 East. Palmer also annexed the islands for New Zealand.

During the 19th century the area was a popular hunting-ground for sealers. The islands were also searched from time to time for missing ships and crews, including those from the General Grant and the Matoaka.

The Hinemoa visited the islands in March 1886 and erected a depot for marooned sailors on the largest island. Captain Fairchild noted that there was no fresh water available on these islands. The depot had been destroyed by the sea by the time the Stella visited the island in 1887. A new Admiralty chart 1022 was issued for the area in 1888, which took into account survey work undertaken by the Hinemoa.

In November 1891 the Hinemoa returned to the islands and built a fresh provisions storage.

Ecologically, the islands are part of the Antipodes Subantarctic Islands tundra ecoregion. Plants include Cook's scurvy grass. The group is home to an endemic spider, endemic insects, and large numbers of seabirds.

The Bounty group has been identified as an Important Bird Area (IBA) by BirdLife International because of its significance as a breeding site for erect-crested penguins, Salvin's albatrosses and Bounty shags.

The whole chain is only 5 km (3.1 mi) across at its longest axis, and comprises three subgroups, the Main Group, the Centre Group, and the East Group. The total area is only 1.35 km2 (0.52 sq mi). The islands are at the antipodes of Bouillé-Ménard, in France (Pays de la Loire). 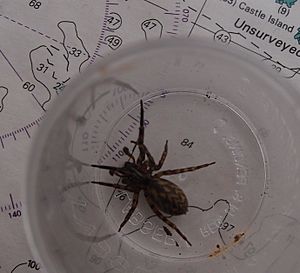 The Main Group is the largest of the three groups, and is located in the northwest of the chain. It includes the group's largest island, Depot Island, which is around 700 metres in length and 400 metres across at its widest point. Proclamation and Tunnel Islands are separated from Depot Island by only a narrow cleft, and are joined to it at low tide. A small islet off the north coast of this group's Spider Island is the chain's northernmost point; the westernmost point is the western tip of Penguin Island.

The Centre Group is located some 1.5 to 2 kilometres to the southeast of the Main Group, and contains three main islands, arrayed in a north–south line. A smaller islet lies immediately to the west. The northernmost of the Centre Group, Funnel Island, contain's the chain's highest point, at 73 metres (240 ft) above sea level. A further 1.5 kilometres to the east is the East Group, which is also arrayed roughly in a north–south line. The largest island in this group, Molly Cap, is the group's southernmost island, and contains the chain's second-highest point, 70 metres (230 ft) above sea level. This group contains two large islets and one small islet, along with several reefs and stacks, one of which is the easternmost point in the chain.

All content from Kiddle encyclopedia articles (including the article images and facts) can be freely used under Attribution-ShareAlike license, unless stated otherwise. Cite this article:
Bounty Islands Facts for Kids. Kiddle Encyclopedia.