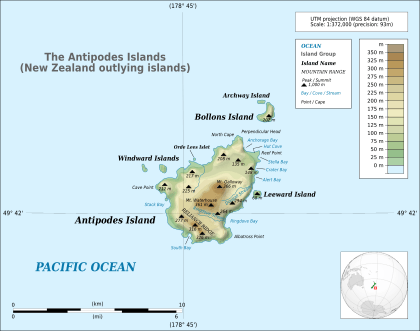 The New Zealand outlying islands comprise nine island groups, located in the subtropics and Subantarctic, which are part of New Zealand but lie outside of the New Zealand continental shelf. Although considered as integral parts of New Zealand, seven of the nine island groups are not part of any region or district, but are instead designated as Area Outside Territorial Authority. The two exceptions are the Chatham Islands, which form a special territorial authority (island council) themselves, and the Solander Islands, which are part of the Southland Region and Southland District.

The term is also used sometimes to further encompass the Balleny Islands, a group of subantarctic islands technically considered part of Ross Dependency and covered by the Antarctic Treaty.

The five island groups of the New Zealand Subantarctic Islands, including their territorial seas, are a World Heritage Site.

The island groups from north to south:

The islands are all uninhabited except the Chatham Islands.

All content from Kiddle encyclopedia articles (including the article images and facts) can be freely used under Attribution-ShareAlike license, unless stated otherwise. Cite this article:
New Zealand outlying islands Facts for Kids. Kiddle Encyclopedia.