Bourne Abbey and the Parish Church of St. Peter and St. Paul is a scheduled Grade I church in Bourne, Lincolnshire, England. The building remains in parochial use, despite the 16th-century Dissolution, as the nave was used by the parish, probably from the time of the foundation of the abbey in 1138. 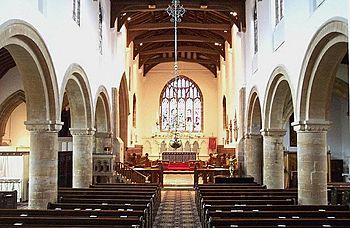 The nave of Bourne Abbey today. The two nave arcades are consistent with a building date of around 1138 as are the responds from the chancel screen, visible at the entrance to the chancel. The repaired scars from the removal of the pulpitum can be seen below them. In the building there are stones carved into the form of arches of a style consistent with the later 12th century. These are likely to be from the eastern side of this pulpitum screen, which would have obscured the view of the chancel while allowing sounds out from it.

While the Domesday Book of 1086 makes it clear that there was a church in Bourne in 1066, and there is a suggestion that there was an Anglo-Saxon abbey, as far as is firmly known, the abbey was founded as a canonry, by a charter granted in 1138, by Baldwin fitz Gilbert de Clare (with the consent of Roger his son and Adelina his wife). He was a member of a post-conquest Norman family, settled in Suffolk, which later made its mark in Wales and Ireland. Adelina was a great-granddaughter of Hereward the Wake, though the connection with the Wake family was not made until the generation after Baldwin and Adelina, when their daughter, Emma married Hugh Wake. The house was for up to 14 canons of the Arrouaisian reform of the Rule of St. Augustine. This was the height of the period of abbey founding and castle-building in England.

The foundation of the abbey was part of a general restructuring of the estate so that the current town centre was built as a new town at the entrance to Baldwin's new castle. The new main road passed between Baldwin's new castle and the abbey. The pre-Norman road lies under the junction between the nave and the chancel. This proximity to the road may have influenced Baldwin's thinking when choosing an order for the new abbey. By this time, Arrouaise itself was moving away from being a hermitage towards providing a service for travellers.

In the late 13th century, the estate associated with Bourne Castle was reorganised so that the main road was moved onto what had been part of the site of the castle and a little away from the abbey.

The abbey was dissolved in 1536 along with the other small monastic houses, in the first phase of Henry VIII's Dissolution of the Monasteries.

The following is a chronological list of the abbots as far as they are known. It is based on that in Swift's book, and from the Victoria County History.

Simon Watton was excommunicated, though we do not know how he had offended.

The Ormulum, an important work in the form of a Biblical gloss, helps bridge the gap between Old English and Middle English in studies of the development of the language. It was probably written in Bourne Abbey by Orm the Preacher, in around 1175.

Robert Mannyng or Robert de Brunne, is well known among scholars of Middle English for his works dating from the early 14th century. He led the writing of English out of its eclipse by Latin and Anglo-Norman. He is often said to have been a monk in Bourne Abbey but he was a Gilbertine and the abbey was Arrouaisian or Augustinian. His name which associates him with 'Brunne', the form of 'Bourne' used in his time is likely to have arisen from his having originated in the town. Since the nave of the abbey was the parish church, Robert, the boy will have known it well until he left for Sempringham in 1288.

All content from Kiddle encyclopedia articles (including the article images and facts) can be freely used under Attribution-ShareAlike license, unless stated otherwise. Cite this article:
Bourne Abbey Facts for Kids. Kiddle Encyclopedia.