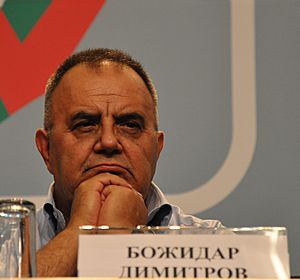 Bozhidar Dimitrov Stoyanov (Bulgarian: Божидар Димитров Стоянов, 3 December 1945 – 1 July 2018) was a Bulgarian historian. He worked in Medieval Bulgarian history, the Ottoman rule and the Macedonian Question. He was the director of the National Historical Museum. He was born in Sozopol, Bulgaria.

Dimitrov Cove in Antarctica is named after him.

All content from Kiddle encyclopedia articles (including the article images and facts) can be freely used under Attribution-ShareAlike license, unless stated otherwise. Cite this article:
Bozhidar Dimitrov Facts for Kids. Kiddle Encyclopedia.